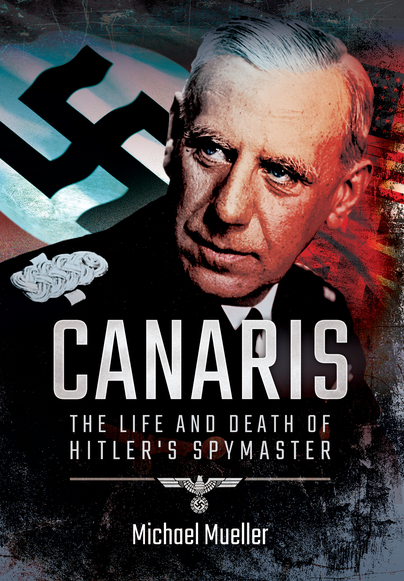 The Life and Death of Hitler’s Spymaster

Add to Basket
Add to Wishlist
You'll be £14.99 closer to your next £10.00 credit when you purchase Canaris. What's this?
+£4.50 UK Delivery or free UK delivery if order is over £35
(click here for international delivery rates)

Even today Wilhelm Canaris is the principal mystery man of the Nazi regime – a man that historians cannot easily classify; a man who rarely showed his hand, who talked little and preferred to listen. Few who knew him ever understood his intentions or plans.

We do know that he was the great protector of the German opposition to Hitler – but at the same time, he was the one who prepared all the major expansion plans for Hitler and the Third Reich. While he protected and motivated those who were eager to bring down Hitler, at the same time he was hunting them as conspirators – one of the many contradictions he was forced to live with in order to stay in control of the Nazi spy network.

This superbly researched biography follows Canaris's career from his first dabbling in the intelligence business during the First World War through his time as head of the Abwehr to his execution in 1945 for his role in the July Plot. A highly readable account, it tells the story of an apparently old-fashioned naval officer, drawn into the web of the Nazi regime.

This is an interesting biography of a most unusual man.

The story of Admiral Canaris is worthy of the finest writer of espionage fiction, and then some. The corrosive operation of the many parts of Nazi Germany created scope for the most complex
betrayals as departmental leaders fought for supremacy. This is a ripping yarn that should not be missed.

Canaris is one of the most enigmatic figures of the Hitler era; views from his contemporaries differed so wildly that he was either seen as an incompetent officer and traitor or as the spiritual leader of the German resistance who gave all he could to save Germany from the looming disaster. In his book “Canaris: the Life and Death of Hitler’s Spymaster”, Michael Mueller presents the history enthusiast with a detailed biography of the admiral who headed Hitler’s military intelligence service, the Abwehr, for nine years. Given the scarcity of material on the admiral himself- no personal diaries or letters, a reserved and quite man who seldom voiced his real opinion - the author has instead focused on the Abwehr, both men and missions and has succeeded in bringing to light the circumstances of Canaris’ life. The accounts of the spy networks, the conspiracies and the intricate foreign diplomacy combined to make this book a rich and interesting story. The author’s style, although lacking in drama, is simple and clear. He had endeavored to present facts and facts only. The story itself is gripping, covering the different eras of 1900 Germany, from the Monarchy to the Weimar Republic and finally the Third Reich. I highly recommend this book to anyone interested in Canaris, the anti-Hitler resistance movement, or the era in general.

This probably the final, definitive attempt to chronicle Canaris and even so trying to find the truth is like trying to grab a hologram. I found this a fascinating book and probably takes us as close to the subject as we shall ever get - he remains an enigma.