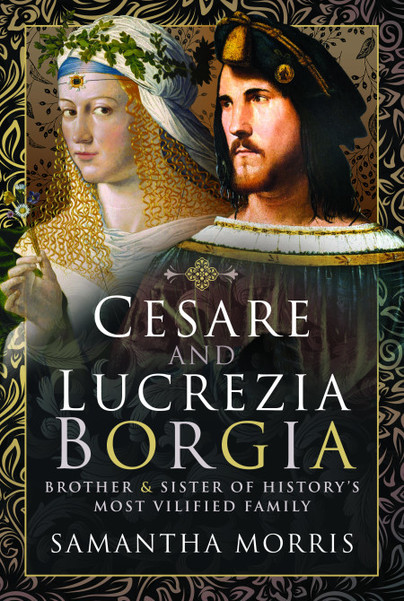 Brother and Sister of History's Most Vilified Family

An article written by the author for Dan Snow's History Hit: 'What Led to the Murder of Alfonso D'Aragona?'

You'll be £15.99 closer to your next £10.00 credit when you purchase Cesare and Lucrezia Borgia. What's this?
+£4.50 UK Delivery or free UK delivery if order is over £35
(click here for international delivery rates)

Myths and rumour have shrouded the Borgia family for centuries – tales of incest, intrigue and murder have been told of them since they themselves walked the hallways of the Apostolic Palace. In particular, vicious rumour and slanderous tales have stuck to the names of two members of the infamous Borgia family – Cesare and Lucrezia, brother and sister of history’s most notorious family. But how much of it is true, and how much of it is simply rumour aimed to blacken the name of the Borgia family?

In the first ever biography solely on the Borgia siblings, Samantha Morris tells the true story of these two fascinating individuals from their early lives, through their years living amongst the halls of the Vatican in Rome until their ultimate untimely deaths. Cesare and Lucrezia Borgia begins in the bustling metropolis of Rome with the siblings ultimately being used in the dynastic plans of their father, a man who would become Pope, and takes the reader through the separate, yet fascinatingly intertwined, lives of the notorious siblings. One tale, that of Cesare, ends on the battlefield of Navarre, whilst the other ends in the ducal court of Ferrara. Both Cesare and Lucrezia led lives full of intrigue and danger, lives which would attract the worst sort of rumour begun by their enemies.

Drawing on both primary and secondary sources Morris brings the true story of the Borgia siblings, so often made out to be evil incarnate in other forms of media, to audiences both new to the history of the Italian Renaissance and old.

Well documented and objective biography. Puts a new light on the lives of the Borgia family. The author provided many new information about this highly controversial family. If you've watched the Borgias, you'll enjoy this very much.

A fine edition to add to the many books tackling these infamous siblings = in both fact and fiction.

Morris make a poignant remark: "... now, as throughout history, people love a good gossip ...", and like us today, they "... want stories that both disgust them and draw them in ...". In their own time, Cesare and Lucrezia are the equivalent of today's Kardashians or Osbornes.

Delving into the family history from its Spanish roots, Morris provides the reader with a concise background of the family including Rodrigo's rise to the Papal throne up until the siblings draw final breath. But the focus here is on the two siblings - Cesare and Lucrezia - as opposed to a complete history of all Borgias. In this easy to read and well presented tome, all the main events are covered off - we are not bogged down in unnecessary detail so readers new to this topic will have no trouble at all keeping pace. For me, I love the Borgias, so much of this was well worn and familiar ground.

Gossip and hearsay were the weapons of the day that were used to destroy reputation - not only powerful, but also long lasting that like a series of chinese whispers, people begin to accept them as truths using that old adage "no smoke without fire" to justify such. And we are more than accustomed to history being written by the victors -as poor old Richard III can attest.

It is easy to forget that what is unseemly to our modern view was very much the norm - here, family is so important, that it is not strange at all to discover that Cesare and Lucrezia were close - afterall, it was the Borgias against the world - who else would they turn to and trust but one of their own.

Morris finishes by taking the reader through the various modern day adaptions of the Borgia story - from film and television, to game and books. Having just taken possession of yet another book on the Borgias, Morris' book will also find a home on my "Borgia" shelf in my personal library.