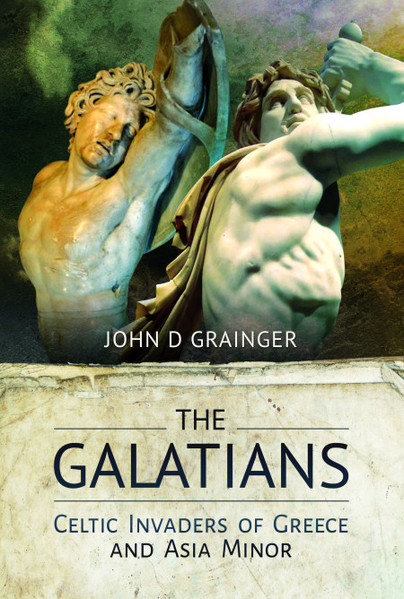 Add to Basket
Add to Wishlist
You'll be £17.50 closer to your next £10.00 credit when you purchase The Galatians. What's this?
+£4.50 UK Delivery or free UK delivery if order is over £35
(click here for international delivery rates)

The eastern Celtic tribes, known to the Greeks as Galatians, exploited the waning of Macedonian power after Alexander the Great’s death to launch increasingly ambitious raids and expeditions into the Balkans. In 279 BC they launched a major invasion, defeating and beheading the Macedonian king, Ptolemy Keraunos, before sacking the Greeks' most sacred oracle at Delphi. Eventually forced to withdraw northwards, they were defeated by Antigonus Gonatus at Lysimachia in 277 BC but remained a threat.

A large Galatian contingent was invited to cross to Asia to intervene in a war in Bithynia but they went on to seize much of central Anatolia for themselves, founding the state of Galatia. Antiochos I curbed their power in ‘the Elephant Victory in 273 BC’ but they remained a force in the region and their fierce warriors served as mercenaries in many armies throughout the eastern Mediterranean. John Grainger narrates and analyses the fortunes of these eastern Celts down to their eventual subjugation by the Romans, Galatia becoming a Roman province in 30 BC.

The Galatians is a thoroughly enjoyable, well-written book on a people that are often overlooked amidst the great dynastic struggles of the Hellenistic world. Grainger wrings every drop out of his limited sources, both written and archaeological, and does so in a way that invites his readers into the conversation. He also works his way methodically through an often complex history, acknowledging at one point the ‘hyper-activity’ of the Roman Republic’s civil wars that he had to untangle.

This is an excellent account of the Celtic incursion into the Greek and Hellenstic world, giving us a much more balanced picture of the Galatians, and of their impact on that world.

This is an excellent narrative history of the Galatians, perfect for the general reader who wants to know more about these extraordinary warriors who were also better organised and more effective diplomats than the ‘barbarian’ tag might imply.