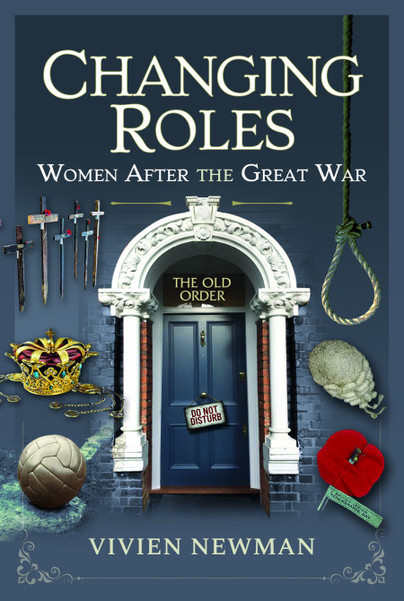 Women After the Great War

Click here for help on how to download our eBooks
Add to Basket
Add to Wishlist
You'll be £4.99 closer to your next £10.00 credit when you purchase Changing Roles. What's this?
Need a currency converter? Check XE.com for live rates

Graverobbers, prime-movers in geo-politics, jailbirds, international football celebs. Such terms are not usually associated with women in the 1920s, as women returning docilely to the domestic cage at the end of the First World War has become part of the accepted narrative. Like many war and immediate post war myths, it does contain some truth, but the story of women between 1918 and 1928 is much more complex, often more positive and certainly far more interesting than previously suggested.

Changing Roles looks at some of the women who forged new identities for themselves whilst exploring how their own or their loved ones’ wartime experiences influenced the roles they stepped into, sometimes reluctantly, frequently enthusiastically, often successfully. It explores how women fought back against the misogynistic climate of the 1920s, used the Sex Disqualification (Removal) Act to achieve their goals, played their part as full citizens and how the legacy of their global endeavours, achievements and occasional failures is still with us today, spreading far beyond our shores.

By telling the stories of both ordinary and extraordinary women whose actions disturbed the status quo, shook the Establishment to its core, and sent shock-waves across the Atlantic, this book presents a cast of fascinating characters ranging from crowned heads to girl gangs, business women to philanthropists, inviting readers to exclaim, “Gosh, I never knew that!”

Recommended reading for the social historian and casual reader alike.

I really enjoyed this book, despite my initial reservations and would recommend it to anyone interested in social history, or early twentieth century history.

Dr. Vivien Newman delves into the lives of British woman and their place in the workforce after WW I. They assumed the workload and roles traditionally held by men. All the men were off to war but life went on and these stories tell how the females shouldered the load.
When the war was over the women were expected to fade back into their traditional roles but many said the hell with that! These women were pioneers in the early movement for equal rights.

I enjoyed the stories about Dorothy Sayers, Agatha Christie and Gertrude Bell very much. They made a difference.

The author, Dr Vivien Newman has produced exceptional stories of women, now mostly forgotten who laid the foundation for future generation of women to be able fulfil their ambitions. Her in depth research has lifted the veil on women of the First World War and later who aspired to seek a better quality of life enabling them to gain a recognition of equality. These women who strived for a better future for themselves and others are to be applauded. The author expresses her considered and brief conclusions about the changing roles of women brought about by the consequences of the First World War. It is a thoroughly readable and noteworthy book.

This very well written book by Vivien Newman tells us all about the new roles of women through various stories where women were prominent. And shows us how they succeeded and what they wanted to achieve. Reading about women in football was interesting as I seem to have read a number of books on that subject recently such as the new Pen & Sword book The History of Women’s Football by Jean Williams. A very good book indeed, well worth the time and commitment.

Written very well, story really draws you in, which is what I love with a non fiction read. Highly recommend as very insightful.

Life changed for many British women after WW1. The author provides us with various examples of women stepping into formerly male dominated territory and succeeding in a way that is inspiring and engrossing today as it must have been back then. From the football fields to the courtrooms, from the working class to the upper class, Dr. Vivien Newman shows women from all aspects of life who took a chance – often against male resistance - and left their mark.

I really enjoyed reading this book. Well researched but with a very human approach to the women and their stories too.

There are a lot of stories in this book that I had no idea about, and women who made a huge impact on the lives of the women around them who didn't get their time in the spotlight that they deserved. Something else that struck me as I was reading this book is that women are STILL facing a lot of the same opposition that women were facing a century ago. That made me sad.

Some very different kinds of women appeared in this book. All of them trying to overcome the cultural blocks which were in their way. In many ways, we have it so much easier now than they did and I am grateful for that. No doubt, some of those trailblazers are responsible for the things that we take for granted now. Gertrude Bell fascinated me, she really did. However, it did strike me that the Middle East was a big mess then and is still a big mess now, same issues, over and over again. Good on her though for trying so hard to make a difference.

An informative, well researched and engrossing book, it's the fascinating story of what changed in women's life after WWI.
The war changed women, a lot of them started new careers and it was an epical and generational changed.
Those women were the first in a long time to work in different field and this book is a good introduction to their stories.
Highly recommended.


How I loved this book.

The introduction sets the post WW1 scene – a time of claims about the wonders women had performed during the war, and the bitter reality they faced as they were expected to return to their former pursuits. Some of the women who refused to do so changed roles. As social innovators they also changed other women’s lives. Their stories are told in Chapter 3, Changing Others Lives. Other women made their impact in a less socially conscious way. For example, Chapter 4, Murder Most Foul, includes writers, Agatha Christie and Dorothy Sayers, and, from the Thomson and Bywaters Case, Edith Thompson.

All the stories are engrossing, from the sports women in the first chapter, Team Spirit; the mothers and other women who tried to keep soldiers’ memories alive through contributing to distant war cemeteries or fighting to bring bodies back to local cemeteries, in Remembering Them, Chapter 2; the aspiring professionals in the intriguingly titled Becoming a ‘Person’, Chapter 4; to the fascinating political women in Chapter 6, The Paris Peace Conference: Promises to keep.

Some of the women’s stories, such as those of Agatha Christie and Edith Thompson are well known to me, but nevertheless were compelling. Agatha Christie’s choice of a Belgian as her first detective, her experiences, and their introduction to some of her novels, and the way in which Miss Marple was developed makes interesting reading. Newman brings a strong feminist approach to the story of Edith Thompson. Although I am aware of this material, what was not familiar is the information in the rest of the narrative in which the changing environment, and the impact on other women threatened with the death penalty, is considered. Becoming a person, the story of women’s attempts to achieve personhood, so they become entitled to education and the fruits of that education, is an excellent read. Again, the issue is familiar. However, Newman’s new material on the role of women and juries is an excellent read. The idea that a woman is not a person seems so bizarre it is worth raising over and over, particularly in such an accessible manner.

However, most of the material is unfamiliar. The women in Chapter 2, in their pursuit of an emotional cause, is enlightening in demonstrating their practical successes. Sportswomen’s clubs and the identity woman achieved, even if short lived makes a compelling story. Marie Stopes, a controversial character, and her continuing impact is an important medical story. Unlike my familiarity with Christie, Dorothy Sayers’ role in highlighting the impact of ‘shell shock’ makes such fascinating reading. Where I found particularly enticing and new material is in areas that introduced not only a woman who adopted a changing role but provided an impressive journey through a portion of history with which I was quite unaware. The Queen of Rumania is written with that deftly comic touch mentioned above, together with a thoroughly detailed account of her political efforts on behalf of her country, and determination that agreements made were kept. Even more enlightening, at least to me, was the role of Gertrude Bell as a ‘key’ member of the British wartime Arab Bureau. This was an educational read indeed.

The narrative is well referenced, with endnotes, an index, and a wonderful bibliography.

This is a wonderful book, with a fascinating cast of women, intriguing history, and an insight into one significant aspect of the post Great War period.

Women did what they had to do during the Great War and wanted to continue the momentum into the era following the war. They were not content to step up and then melt into oblivion. This book is about the women who gave their all to combat misogyny and become citizens in every sense during the fascinating years of 1918-1928. Some were not exactly those to aspire to but they defied notions regardless.

Female football burst onto the scene and became a massive hit, so much so that even some tea houses started a healthy rivalry. Teams even traveled and entertained thousands. Brazen women formed a girl gang called the Forty Elephants in London, something I had not heard of before. They robbed stores, necessitating the need for security. Some of the girls resorted to violence when necessary. They were often abandoned and impoverished and had a desperate need to belong and survive.

One of the most interesting stories involves advocating to bring remains of soldiers home rather than being buried where they fell abroad. Very heartwarming and heart rending. Similarly, Gertrude Jekyll adamantly felt that cemeteries should be pretty and cared for like gardens. She and others also felt that soldiers should be honoured by headstones.

Feeding impoverished children orphaned after the war, regardless of their ethnicity, was a goal of many women. Fresh milk was sought after and supplied. In order to garner financial support, a shocking pamphlet of a malnourished toddler was distributed. But it did work. Beautiful, beautiful story.

Female authors began writing detective novels. Agatha Christie even wrote a female sleuth, Miss Marple, into her books. And then there is the story about the queen who used her position against Bolshevism and for humanitarianism.

My sincere thank you to Pen & Sword and NetGalley for the privilege of reading this inspiring book! Well worth reading.