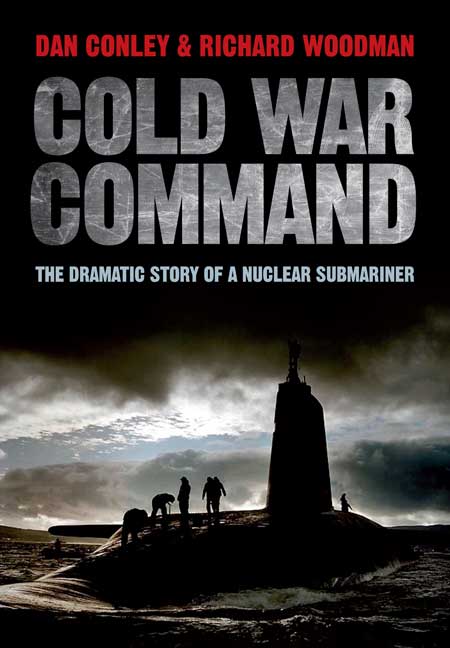 The Dramatic Story of a Nuclear Submariner

Click here for help on how to download our eBooks
Add to Basket
Add to Wishlist
You'll be £10.00 closer to your next £10.00 credit when you purchase Cold War Command. What's this?
Need a currency converter? Check XE.com for live rates

The part played in the Cold War by the Royal Navy's submarines still retains a great degree of mystery and, in the traditions of the 'Silent Service,' remains largely shrouded in secrecy. Cold War Command brings us as close as is possible to the realities of commanding nuclear hunter-killer submarines, routinely tasked to hunt out and covertly follow Soviet submarines in order to destroy them should there be any outbreak of hostilities.

Dan Conley takes the reader through his early career in diesel submarines, prior to his transition to the complex and very demanding three-dimensional world of operating nuclear submarines; he describes the Royal Navy's shortcomings in ship and weapons procurement and delivers many insights into the procurement failures which led to the effective bankrupting of the Defence budget in the first decade of the 21st century. In command of the hunter killer submarines Courageous and Valient in the 1980s, he achieved exceptional success against Soviet submarines at the height of the Cold War. He was also involved in the initial deployment of the Trident nuclear weapon system, and divulges hitherto un-revealed facets of nuclear weapons strategy and policy during this period.

This gripping read takes you onboard a nuclear submarine and into the depths of the ocean, and relays the excitement and apprehensions experienced by British submariners confronted by a massive Soviet Navy.

As seen in Warships IFR Magazine.

As featured on White Horse News and in the Bath Chronicle.


Not just a memoir, this gripping read is the first book to uniquely chronicle both the British and American submarine developments and events in the Cold War era.

A submariner in his 20s had considerable responsibility. Living and working conditions at sea were sometimes a challenge but entirely acceptable to most young men of that age. Depot ships were spacious and comfortable. Once through training, you had a job which generated a feeling of satisfaction and you had an acknowledged status everywhere you went in the world.

As a serious minded and ambitious Scotsman, it is not certain that Conley fully appreciated his good fortune, and a habit of mostly constructive criticism is never far from the surface in a narrative written in cooperation with the naval historian Richard Woodman. As the biography moves into the 1970s, the Cold War at sea escalates and the submariner’s world is changed forever by nuclear propulsion. Conley is in the perfect position to advance his career, which he does with obvious skill, profiting from the comprehensive training he is given. He works hard. There are not many officers who while on leave during Command training, can claim to have driven through the streets of Paris practising their speed/time/distance mental arithmetic for the periscope course!

He becomes a specialist in the tactical use of newly developed sonar and an outspoken critic of our existing electric torpedoes. Embedded for two years in the US Navy’s submarine tactical development group in New London, he is a trusted and influential member of the American team and on return to the UK is able to draw on that experience when in command of two successive SSNs. By then he has an impressive grasp of covert surveillance techniques in anti-submarine warfare based on using passive sonar only. This is not a skill easily acquired. In these chapters on SSN command, there are more details of encounters with Soviet boats which add to his contribution to the book Hunter Killers by Iain Ballantyne.

Promoted to Captain and appointed to monolithic institutions in Bath and Whitehall, Conley encounters the worlds of shipbuilding design and weapon development which do not respond with any enthusiasm to individual contributions made by mid-ranking seaman officers, particularly now that the imperatives of the Cold War have ended with the break-up of the Soviet Union and the consequent further reduction in UK defence spending.

Throughout the book Conley’s angst, except possibly in America and when he is in command, is fairly widespread and embraces elements of the Royal Dockyards, the British Shipbuilding Industry, early SSN command team training, torpedo development, the Procurement Executive at Bath, aspects of new nuclear submarine designs, as well as the Ministry of Defence. In every case he has a point, particularly on torpedoes. However in a far from perfect world, Britain built, manned and operated some formidable submarines. Despite everything, it still does.

In his Foreword, Admiral Mike Boyce, who was one of Conley’s SSN contemporaries, recommends the book as a necessary historical record of the experiences and observations of those who lived through ‘the immense engineering and operational challenges which were met by the remarkable dedication and competence of the crews’.

An exciting and lively read compressed into 280 pages of text that describe the life and career of Dan Conley, a man who made a name for himself as a submariner and captain during one of the most tense periods of history... An excellent book for any collection.

This highly readable account of service in nuclear submarines at the height of the Cold War is neither a Tom Clany style thriller nor a 'warts and all' story much beloved by retired officers. Instead it is a diary of the career of a British submariner during the rise and fall of the Royal Navy's nuclear submarine force.
This book should be read by (a) all those interested in the events of that period and (b) those trying to gain insight into the bureaucratic and political incompetence that has plagued British Defence policy since 1945. Well worth its place on the bookshelf.

The narrative is well written, and background explanations of political, strategic and technical developments are included in appropriate places. If you are looking for an account of a typical submarine officer's career in the second half of the 2oth Century, then this book will be of interest.

A book that should be widely read

The insight into the events and circumstances in which Conley was a participant make the narrative alive and exceedingly valuable to professional mariners, submariners and maritime military managers.
The book is replete with remarkable descriptions in colourful British colloquialisms and typical understatement. The excellent descriptions of basic submarine design and operation are enlarged with characterizations of the hazards and discomforts inherent in battery driven submarines.

A fine blend of technical analysis mixed with personal anecdotes, there is plenty of high drama and moments of humour.
Richard Woodman has crafted Conley's tale into an easy and exciting read. Cold War Command comes highly recommended.

This book is at its best when explaining the black arts of submarine warfare, the associated weapons technology and tactics. It is never less than fascinating in that respect and is an important step forward in our understanding of what happened out there under the sea during the Cold War. Conley presents a passionate insider's perspective on a Submarine Service that thrived, in many cases, despite itself.

CAPTAIN RICHARD WOODMAN is a distinguished maritime historian and author.