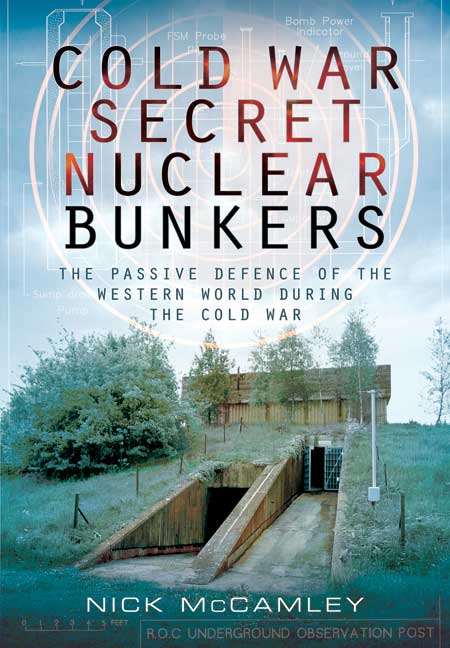 The Passive Defence of the Western World During the Cold War

Add to Basket
Add to Wishlist
You'll be £16.99 closer to your next £10.00 credit when you purchase Cold War Secret Nuclear Bunkers. What's this?
+£4.50 UK Delivery or free UK delivery if order is over £35
(click here for international delivery rates)

"Nuclear Bunkers" tells the previously undisclosed story of the secret defence structures built by the West during the Cold War years.

The book describes in fascinating detail a vast umbrella of radar stations that spanned the North American continent and the north Atlantic from the Aleutian islands through Canada to the North Yorkshire moors, all centred upon an enormous secret control centre buried hundreds of feet below Cheyenne Mountain in Colorado. This is complemented in the United Kingdom with a chain of secret radars codenamed 'Rotor' built in the early 1950's, and eight huge, inland sector control centres, built over 100' underground at enormous cost.

The book reveals the various bunkers built for the U.S Administration, including the Raven Rock alternate war headquarters (the Pentagon's wartime hideout), the Greenbrier bunker for the Senate and House of Representatives, and the Mount Weather central government headquarters amongst others. Developments in Canada, including the Ottawa 'Diefenbunker' and the regional government bunkers are also studied.

In the UK there were the London bunkers and the Regional War rooms built in the 1950's to protect against the Soviet threat, and their replacement in 1958 by much more hardened, underground Regional Seats of Government in the provinces, and the unique Central Government War Headquarters at Corsham.

Also included in the UK coverage is the UK Warning and Monitoring Organisation with its underground bunkers and observation posts, as well as the little known bunkers built by the various local authorities and by the public utilities.

Finally the book examines the provision, (or more accurately, lack of provision), of shelter space for the general population, comparing the situation in the USA and the UK with some other European countries and with the Soviet Union.