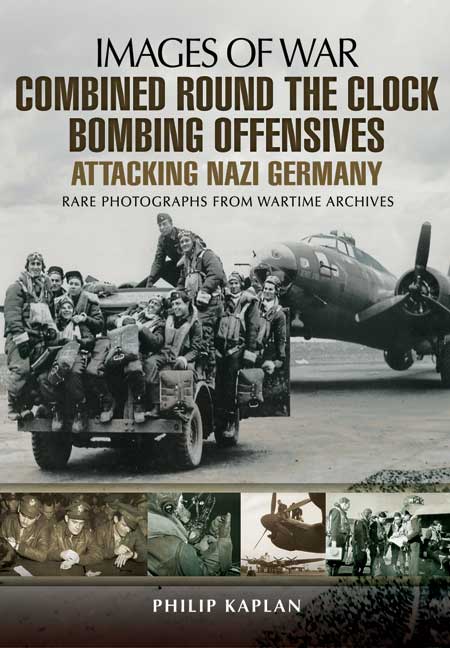 Add to Basket
Add to Wishlist
You'll be £14.99 closer to your next £10.00 credit when you purchase Combined Round the Clock Bombing Offensive. What's this?
+£4.50 UK Delivery or free UK delivery if order is over £35
(click here for international delivery rates)

In World War Two, the most effective fighting units were usually small – submarine crews, infantry platoons, commandos, and bomber crews. Of these it could be said that the men who crewed the bombers caused more damage to the enemy and had a greater impact on the outcome of the conflict than any number of the rest. Most of the aircrews were volunteers (in the RAF, they all were), intelligent, fit, and highly trained. Each knew he was essential to the team; he knew that a mistake by anyone could mean the death of all. Their interdependence was a welding influence.

This library of rare archive photography provides a pictorial history with which to better understand the true extent of Allied operations during the second half of the Second World War, after America had fused its allegiance and the Allied contingent fired itself up for a reactionary attack against Nazi Germany, following a series of defeats and setbacks at their hands during the first half of the war.

First-hand accounts from both American and British bomber pilots feature. An account of the dramatic attack at Peenemunde is included as well as a host of accounts of the 3 December 1943 RAF bombing raid on Berlin. They work to create a real sense of precisely what 'round the clock' actually meant, as these concentrated attacks drained pilots of every ounce of energy they possessed.

This photo essay produces a very effective picture of the massive bombing offensive against Germany. It is a very good selection of images and informative text in their support that will appeal to all those with interests in the greatest global conflict.

Another new title in the very popular Images of War series from Pen and Sword books. Based around a fine collection of archive photos, including one or two showing the crumbling remains of old airfield buildings, this does what the title describes, and links together the daylight bombing of the USAF with the night bombing of the RAF. Hence the mix is of people and equipment from a wide cross section of those involved, as well as some aerial pictures of their targets.

Accompanied by some interesting memories of those who remember their wartime experiences, it doesn't try to retell the chronological sequence of events, but the various elements that mixed together to add life to the story. These are highlighted by the various sections in the book, with The Hardware, showing the bombers and fighters involved, as well as the Country Folk, where the arrival of so many new airfields and new people had an impact on the local areas where they were based. Then there is Dinghy, Dinghy, and where aircrew remember what it meant if their damaged aircraft could not make it all the way back home.

Mud and Muscle relates to the work involved in building all these new airbases in the UK and making them operational. A British Raid involves the story of the RAF raid on Peenemuinde, the German rocket research centre on the Baltic coast. In contrast it then moves on to The Daylight Raiders, with the B17s and B24s along with their crew members and their 'Little Friends', the fighter escorts. A photo of the huge Flak Tower in Hamburg is also an impressive reminder of what risks they faced when over a target. The final sections cover To the Big City, and the regular raids on Berlin, while a final set of pictures shows a good selection of War Paint, the fashion for applying Nose Art to aircraft by bother the RAF and USAF aircrews.

The photos are a good selection, all with informative captions, while the text content of the book that accompanies them give an excellent insight about what it felt like tohave been here and experienced living through those historic times.