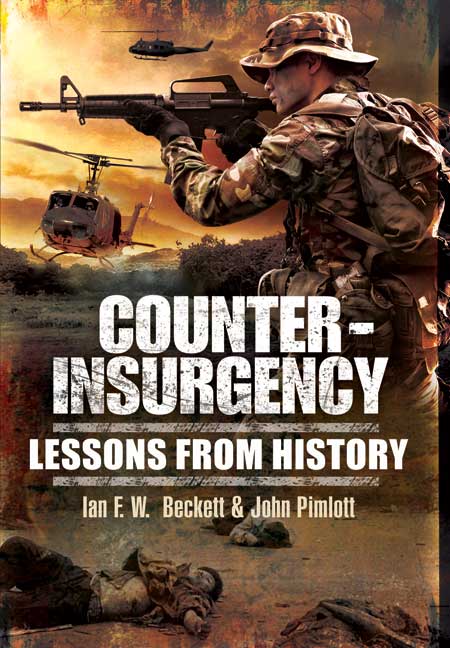 Click here for help on how to download our eBooks
Add to Basket
Add to Wishlist
You'll be £4.99 closer to your next £10.00 credit when you purchase Counter-insurgency. What's this?
Need a currency converter? Check XE.com for live rates

Insurgencies are at the centre of most of the conflicts that confront the modern world, and they have been since the Second World War. Leading armies across the globe have well-developed strategies for fighting counterinsurgency campaigns which are continually adjusted and refined as a result of direct experience gained in the field. Understanding this experience and learning the right lessons from it are essential as new insurgencies break out. Perhaps this is especially important today in the wake of the attacks on America and the fighting in Iraq and Afghanistan, and that is why this new edition of a pioneering survey of the subject, first published 25 years ago, is of such immediate relevance today. Editors Ian Beckett and John Pimlott brought together a team of expert contributors who provided an international overview of counter-insurgency strategies and techniques as they were perceived and put into practice a generation ago.

This historical survey, which covers irregular warfare in countries as widely separated as Chad, Vietnam, Uruguay and Mozambique, will be fascinating reading for anyone studying insurgencies and the armed response to them.

This is the second edition of this classic study into counter insurgency, with chapters on Vietnam, the Tupamaros, Mozambique and Namibia, and looks at techniques both present day and past.

In the past I have heard all kind of funny things said about counter-insurgency warfare. It’s not ‘real war’, or that it causes armies to ‘go soft’. But I guess on the other hand it is also symptomatic that military historians have not really studied COIN as much as they should have. This is a very useful book, therefore. And it is extremely relevant, in that both of the authors have lectured at Sandhurst and other Defence institutions.

The British Army has perhaps the most experience of fighting counter-insurgency. Not only does the Army have a history of fighting small, foreign wars against populations and having to make do and improvise, but in the long drawn-out withdrawl from Empire British Forces were time and time again called in to provide a bulwark against unsavoury insurgents. This happened in Malaya, Borneo, Aden, Oman, and in numerous places in Africa. And not to mention Northern Ireland. And the British Army has an enviable record of success. One of the key lessons learnt from the insurgency in Malaya is the importance of uniting civilian and military leadership – in Malaya the land forces commander was also the Governor-General, not only providing unity in leadership but also eliminating a possible area for rifts. In Oman, every effort was made to win ‘hearts and minds’ of the locals, and to take care of economic and social factors so the insurgency did not seem a viable alternative.

The French Army, on the other hand, did not fare too well in Vietnam or Algeria. The author of this chapter even feels that at times the French Army studied COIN so much that some officers began to sympathise far too much with revolutionary ideals. Certainly, the French failure in Vietnam led to the debacle that the US waded into not long after. And failure in Algeria led to all manner of instability at home, including leading the Generals to machine for a change of Government.

It would be difficult to argue that the US Army has a good reputation when it comes to COIN. Clearly, the flexible, unconventional and tactful approach that it calls for does not lend itself well to forces based on overwhelming firepower and materiel. Listening to quotes from US Generals over Vietnam, you get the feeling that it was not the kind of war that they wanted to fight. Well, you’re lucky if you get to pick your wars, otherwise you fight the ones your masters want you to. And when you do, you should fight to win. Or at the very least, not lose. Lines of command were hopelessly complicated – one observer found it hard to work out who was actually running the Vietnam War, with so many headquarters and Departments involved.

In contrast, the Portuguese Army actually had a pretty good track record at dealing with COIN in countries such as Guinea, Angola and Mozambique. This is even more remarkable when we consider Portugal’s size, it’s economy, and the fact that its forces were routed in Goa not long before. Their success in fielding such forces in their colonial possessions and their subsequent success would suggest that size is not an issue in dealing with COIN. A military coup led to Portugal’s withdrawal from Empire in 1974, rather than any kind of military reverse.

It’s a similar picture with the Rhodesian Army, which fought a COIN campaign against the pre-cursors to Robert Mugabe in the African bush. As well as the Selou Scouts and forming a Rhodesian SAS, part of the Rhodesian’s tactics for countering the terrorists included erecting game fences and minefields along frontiers. The amount of haven states along Rhodesia’s borders, however, made things more problematic. Rhodesia might have become Zimbabwe eventally, but the Rhodesian security forces were by no means defeated, and in the opinion of the author could have continued the campaign indefinitely.

So, looking at these various COIN campaigns, do any lessons emerge? Firstly, that civil and military leaderships needs to be as one – either united, or merged. Officers need to forget about ideas of set piece battles and focus on the campaign at hand, and how to win it. The US General who said that he would not let Vietnam ‘destroy everything that the US Army stands for’ was ironically showing the kind of inflexibility that loses COIN campaigns in any case. And far from making security forces ‘go soft’, the flexibility and agility required in COIN campaigns can actually be very useful – witness the experience gained by the British Army in Northern Ireland, and how it engendered excellent leadership at junior NCO level.

Whether we like it or not, insurgencies are a fact of life in the modern world, and if we want to defeat them we would do better to work out how best to make their success impossible, rather than bemoaning that they do not fit into our fixed ideas of what war is, or should be.

This is a very credible book, and I enjoyed reading it immensely.

Dr John Pimlott was Head of the Department of War Studies at the Royal Military Academy, Sandhurst from 1993 until his death in 1997. He had worked at Sandhurst for 24 years and was a prolific author, whose publications included Guerrilla Warfare, Vietnam: The History and Tactics, and the Guinness History of the British Army.