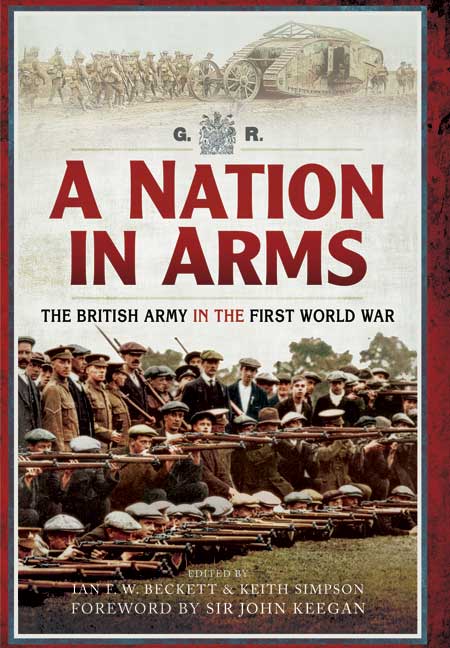 A Nation in Arms (Paperback)

The British Army in the First World War

Add to Basket
Add to Wishlist
You'll be £14.99 closer to your next £10.00 credit when you purchase A Nation in Arms. What's this?
+£4.50 UK Delivery or free UK delivery if order is over £35
(click here for international delivery rates)

The Great War was the first conflict to draw men and women into uniform on a massive scale. From a small regular force of barely 250,000, the British army rapidly expanded into a national force of over five million. A Nation in Arms brings together original research into the impact of the war on the army as an institution, gives a revealing account of those who served in it and offers fascinating insights into its social history during one of the bloodiest wars.

The opening chapter focuses on the extent of military participation in wartime Britain and its repercussions. The authors go on to examine the regular army in 1914, the officers, Kitchener's New Armies, the Territorials, soldiers and civilians, the relationship of the army as an institution to society, and a final chapter reassesses the post-war army. To illuminate their general theme, the authors highlight the experience of individual units, among them the Black Watch, the Buckinghamshire battalions of the Territorial Force and the Welsh 113th Brigade of the New Army.
an important pioneering work that is indispensable reading' (Stand To - Peter Scott)

'the authors...demonstrate how much be gained by seeing the history of an army as an aspect of general social history' (THES - Keith Robbins)

'a deeper and invigorated understanding of the extraordinary relations between modern war and the social engines that produce it' (R.E .Canjar)

As featured in 'The Cornishman'.


For any student, researcher or avid enthusiast of the British Army in the First World War, this book is an essential addition. It provides a pivotal social study of the British army in the First World War.  The First World War was the first conflict which pulled people together in uniform on such a large scale. In detail, this book brings out the story of how the British Army went from a small regular force of 250,000, to a force which swelled to over five million, in a such a relatively short timescale. On the one hand, the book provides marvelous research into the effect which the war had on the army as an institution. But, more than that, it also provides an excellent picture of the social history during this time, and the Army's connection to this... Overall a splendid book which will be referred to many times.

A worthwhile and scholarly work which all those interested in the Great War should consider for their collections. Full of facts and figures, it also provides insights into our social history and the impact of the war on the army as an institution.
An informative and scholarly work. 9/10

Keith Simpson is a Conservative MP and a military historian. He was formerly a senior lecturer in war studies at the Royal Military Academy, Sandhurst and a director of the Cranfield Security Studies Institute. His publications include The Old Contemptibles and a new edited version of the classic, The War the Infantry Knew.