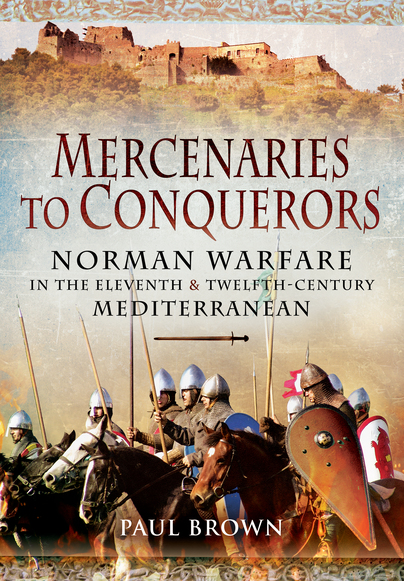 Norman Warfare in the Eleventh and Twelfth-Century Mediterranean

Add to Basket
Add to Wishlist
You'll be £25.00 closer to your next £10.00 credit when you purchase Mercenaries to Conquerors. What's this?
+£4.50 UK Delivery or free UK delivery if order is over £35
(click here for international delivery rates)

When a band of Norman adventurers arrived in southern Italy to fight in the Lombard insurrections against the Byzantine empire in the early 1000s, few would have predicted that within a few generations, by force of arms, some of these men and other later arrivals would seize control of Apulia, Campania, Calabria and Sicily. How did they make such extraordinary gains and then consolidate their power? Paul Brown, in this thoroughly researched and absorbing study, seeks to answer these questions and throw light onto the Norman conquests across the Mediterranean which were even more remarkable than those achieved in France and England.
Throughout he focuses on the military side of their progress, as they advanced from mercenaries to conquerors, then crusaders. The story of the campaigns they undertook in Italy, Sicily, the Balkans and the Near East, of the battles and sieges that marked their expansion, reveals their remarkable talent for war and the increasing efficiency of their organization.
Particular attention is paid to the polyglot character of Norman forces, and the growing sophistication of their tactics, from cavalry raids to combined-arms warfare and siege craft. The dominant role played by a succession of Norman leaders from the Hauteville family is a key theme of the narrative – a line of ambitious and ruthless rulers that ran from Robert Guiscard and Bohemond to Tancred and King Roger II of Sicily.
Paul Brown’s account of the Norman conquests in the Mediterranean is based on the most recent scholarship in the field. It challenges some of the common assumptions about the equipment, organization and fighting methods of the Norman armies and the men who fought in them.

Unlike other books on how rules are created it is much less focused on mechanisms and more on system design. It gives an insight in to the author's view of how a successful system should work. As such, it is bound to appeal to those with an interest in how wargames work as well as those who want to design their own games. I'd certainly recommend it.

Although best known to Westerners for taking over England under William the Conqueror, the Normans deserve more attention for their equally remarkable feats in the Mediterranean and the Balkans. Brown’s important book brings this to light in a way that will satisfy all historians interested in the Byzantine era as well as medieval warfare.

Brown follows the progress of the Normans throughout the region in detail with specific focus on the military aspect. Their rapid progress from mercenaries to conquerors and finally crusaders is superbly covered. Campaigns through Italy, Sicily, the Balkans and the Near East show how efficient the Normans had become at battles and sieges.

The Normans from a different angle rather than the usual northern European aspect is very well written and presented in this chunky hardback.
Recommended

Mercenaries to Conquerors by Paul Brown evaluates military art and the role played by the Normans Mediterranean in the eleventh and twelfth centuries.

For me, the Normans were the people who rightly took the English throne by virtue of the fact it was promised to William of Normandy, and helped to civilise the indigneous British. The fact that I share their name is by the by, I have always thought that the Normans were the best people to civilise England and Wales. Paul Brown's brilliant study of the wider perspective of Norman conquests is both thrilling and informative.

Prior to becoming an independent scholar Dr Paul Brown taught medieval history at the University of New England, Australia for ten years. His research has focused on the cultural, literary and military aspects of relations between the Normans, Lombards and Byzantines in the eleventh century. Paul’s work has been published in the Journal of Medieval History, and in a collection of essays on Byzantine history. He has also presented research papers at the Australian Association for Byzantine Studies conference and the International Medieval Congress.