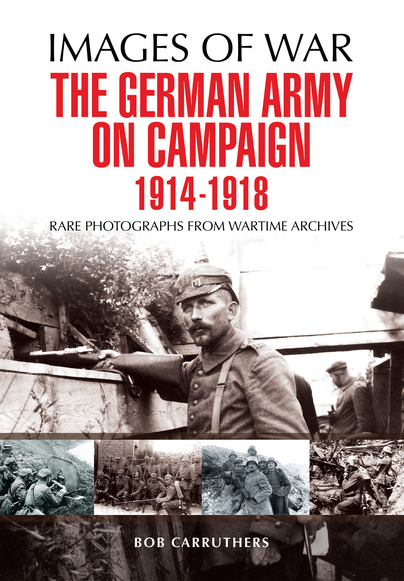 Click here for help on how to download our eBooks
Add to Basket
Add to Wishlist
You'll be £4.99 closer to your next £10.00 credit when you purchase The German Army on Campaign 1914 - 1918. What's this?
Need a currency converter? Check XE.com for live rates

This is the photographic history of the German Army on campaign throughout the First World War. The most striking images from the German perspective are gathered here and form a significant historical record of one of the most important events of modern history.

In 1914, the German war machine began its advance into Europe. By 1918 the German Army had lost over two million men, and suffered through some of the most horrific events in human memory. In a war caused by politics, it was the ordinary men who lost their lives and here we aim to highlight the human cost of the conflict from beginning to end.

This is a collection of photographs, showing how similar life was on the other side of no man’s land, as well as highlighting the differences.

The ‘Images of War’ series of a very inspired idea on the part of Pen & Sword. The quality and selection of photographs within is first class with just the right amount of text from the worthy Bob Carruthers to put them in their correct context.

A book that proves every picture tells a story.

Bob Carruthers's book looks at the conflict from the point of view of the Germans, reminding us of the eventual two million dead ordinary people who, like the men of Britain, responded to a call to arms that was ultimately futile and tragic.

Bob Caruthers is better known as a WW2 author but his new Images of War: The German Army on Campaign 1914-1918 offers his expertise on the German Army in the Great War. The book is not just about Verdun, covering the whole war, but it is certainly a theme. The images are drawn from private collections as well as official sources, so many of them are published for the first time. An excellent visual overview of the German Army in WW1.

Another new WW1 period addition to the Images of War series from Bob Carruthers for Pen and Sword. There is lots in here for anyone interested in WW1, and there has been a lot of interest in the period as we work through the 100 year anniversary of each year of the war. After a few pages of background text, the rest of the story is told through a fine collection of period photos.

This one isn't divided into separate chapters, just the one collection of photos which give a chronological sequence to the story. It is particularly interesting to see the changes in the uniforms and equipment worn by the troops of the German Army as the war progressed. For the modeller there is a lot of useful material. There are all the uniforms and personal equipment, even gas masks for both the men and their mules but there are also the trench mortars, artillery and even the A7V tanks all included in here. For anyone wanting to build dioramas, there are also plenty of details showing the detailed construction of German trenches and dugouts.

It is also right to point out that a number of the images show not only the devastation caused to the French countryside but also the men themselves, and the horrors of the war for men and horses on all sides of the conflict are well illustrated, in this case from the German side. Photo collections such as this remain very popular, a fact well illustrated by the regular release of new titles in this Images of War series.