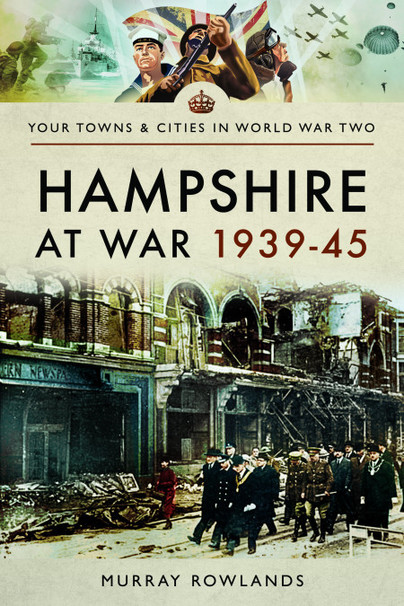 Click here for help on how to download our eBooks
Add to Basket
Add to Wishlist
You'll be £4.99 closer to your next £10.00 credit when you purchase Hampshire at War 1939–45. What's this?
Need a currency converter? Check XE.com for live rates

This is an important first book on the major pivotal role Hampshire played in World War II. You will find principal details of the genesis for D-Day and how the Battle for Britain happened on a day by day basis. The author highlights the people’s experience of total war from the blitz in Portsmouth, Gosport and Southampton and raids throughout Hampshire. Whilst, at sea and in the dockyards you will find details of the Royal Navy’s role. As well as saluting the role of civilians creating and building Spitfires and Hurricanes, Hampshire at War 1939 - 1945 places a rightful spotlight on the role Hampshire's women played in the final victory.

Hampshire’s major effort towards final victory arose from the towns and hamlets of the County set out in this unique book. Training for the secret war and espionage took place in Beaulieu and the training for the Cockleshell Heroes took place around Southsea. Hampshire’s War involved the arrival of men and women from all over the world but in particular from Canada and America with important cultural changes for everyone living there. In 1940, when invasion was threatened, a defence of Britain had to be oganised and Hampshire's coast was particularly vulnerable. Details of how German troops would be resisted after landings in the Solent and along Hampshire’s coast are also explored.

Hampshire at war 1939 - 1945 traces the progress of evacuating its children from vulnerable cities such as Southampton and Portsmouth and records the experience of children themselves. But most importantly, Murray Rowlands provides the experience of living through WWII, as it happened.

A superbly researched book that will appeal to anybody with an interest in Hampshire and the Isle of Wight during the Second World War.

Article: 'Everyone in county played vital role in world war'

Article: 'Hampshire's role in Second World War' as featured by

This is an interesting account of civilian and military life in Hampshire in WWII.

Murray Rowlands has written a lively account of the importance of Hampshire in the defence of Britain in World War II, packed full of detail, interesting anecdotal material and photographs from those who lived through the war and participated in it. Hampshire at War 1939-45 follows his earlier book, Aldershot in WW1, published last year in the same series. He has also written about his two New Zealand uncles and their experience in World War I in Innocents into War and has regularly spoken to local history associations and study groups on topics related to military history such as his talk on Earl Haig and to the New Zealand Studies Network on the New-Zealand-born surgeon Sir Harold Gilles.

When Murry Rowlands, a friend of many years, asked me to review his latest book I knew from the start that this would be a book with a difference.
I was born in Aldershot and worked at the RAE and whenever the subject of the war cropped up, I was always told ‘oh a couple of bombs were dropped around here otherwise nothing much really happened’ what a very different story emerges, and that for my part of Hampshire the area did see a lot of activity from bombing raids to the huge build-up of troops to the ground breaking work at the RAE.
This book deals with one very specific area, Hampshire, and its vital role during the Second World War. Hampshire has been at the forefront either for defence or the launching of operations against the enemy for hundreds of years. It could be argued because of its location and the hub of the military services Hampshire is the premier county of England.
The book starts of with the normal lead up to the war with the lack of spending on defensive measures needed to defend the country and the over deluded and over optimism that a deal could be done with Hitler. But one could ask why do we need to go over these well-known facts again with all the arguments about were money should be spent on defence either on the navy, army, or RAF? These facts are important to restate as they do set the background to the unfolding events taking place but in a very different way as to how it related to the local perspective. The MP for Aldershot Lord Wolmer, spoke about these events unfolding in Europe, on how Britain’s defences were in an ‘impregnable state,’ arguing for rearmament and yet supporting Lord Halifax the great appeaser. The debate about the conscientious objector and the reintroduction of conscription in the local press with the memories of the First World War rearing its ugly head again. It also highlights the ‘typical’ British way of doing things with government passing legislation requiring local authorities to put in place the Fire Brigade Act and how they struggled with the lack of equipment or to near breaking point during the bombing raids on the coastal areas, ARP measures to the issue of gas masks to name but a few. You get that sense of ‘how cheaply can we do it for’ and ‘who’s going to pay for it’ and then just total disorganisation and at times the utter incompetence of those trying to organise a civil defence and no doubt a touch of ‘precious syndrome.’
This book is about real stories of real people and of how the people of Hampshire coped with the heavy demands of war, their ‘Blitz,’ war production and the realisation that if an invasion happened Hampshire would be first on the Germans list. The numbers of casualties suffered throughout the war, the destruction of town centres and the many people that during my childhood I grew up knowing. My father’s best friend who went down with HMS Hood even our family was touched directly.
But what really fascinated me was little unknown facts that, we not only gave assurances of military support to Poland but also Turkey and Romania. The number of Commonwealth troops stationed here preparing to go to France to support the BEF before Dunkirk. This to me puts a whole different light on what might have happened if the Germans did attempt to invade. How Hampshire endured most of the Battle of Britain. How the bombing of Southampton led to the residents’ morale falling so low due to the failure of civic government. The role played in the formation of the SOE, Churchill’s secret army and the failure of the Dieppe raid which impacted on the Canadians who were stationed in Hampshire.
The story about the LDV(F) later to become the Home Guard and the possible unit stationed at Beechleigh and its commander who may have been the inspiration for Captain Mainwaring and for that wonderful series Dads Army. The author does not disparage the Home Guard, something that all too often happens, no he gives them the credit they deserve and acknowledges they did become a very effective force.
You will find an excellent range of photographs, many I have never seen before but then that is to be expected of a book like this. There is plenty of information with detail about each affected area but its not so detailed as to be a boring read. I enjoyed this book immensely maybe in part being Hampshire born but this should appeal to all those looking for that something different.
And finally, I end with a cautionary note. I would also strongly suggest that those in power who make decisions about our future defence policy spare a few minutes to read this book because there are in my opinion some very strong similarities between now and then.
I thoroughly recommend this book.

Article: The Town's tales during the war by Dan Whiteway as featured by

In-depth local histories of UK communities’ involvement in the two World Wars might not be expected to be relevant to New Zealand. But in two books contributed to a series of local histories published by Pen & Sword Books, New Zealand-born author Murray Rowlands sheds new light on New Zealand soldiers’ lives both on and off the battlefields.
Drawing on previously neglected information sources, he focusses in particular on Aldershot, where the New Zealand Artillery and Medical Corps were based in WWI. He describes New Zealand soldiers’ training, rugby-playing and search for entertainment in vivid detail as well as the medical treatment and farewells at funerals that many needed.
New Zealanders were back in Aldershot and other parts of Hampshire during WWII and Rowlands weaves their stories of risk-taking, downtime, death and survival into the wider picture of a local community caught up in critical wartime events. Little-known New Zealand names are highlighted as well as those of General Freyberg and poet Denis Glover.

It is very rare for me to read a book on social/military history and be reluctant to put it down !
I thoroughly enjoyed Hampshire at War and I both learned a lot but it also revived memories of my own childhood - evacuees,Home Guard,rationing,GI’s etc,etc.A most enjoyable read.