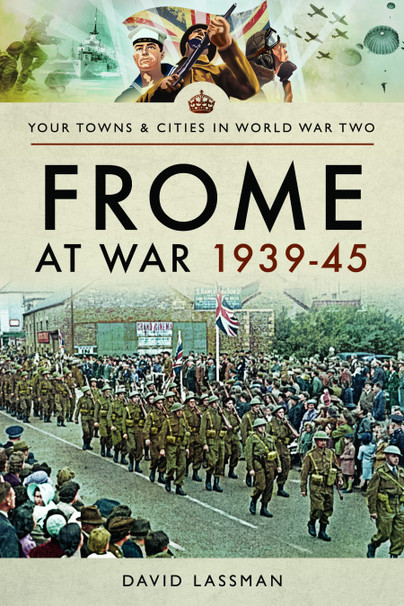 Frome at War 1939-1945 is a comprehensive account of this Somerset market town’s experience of the conflict, covering in detail life on the Home Front set against the background of the wider theatres of war.

The narrative of that global struggle is given with a focus on the ordeals endured by the people of Frome, as they cheered their men and women fighters off to war, welcomed hundreds of evacuated men, women and children to the town, and contributed their part to the fight against Hitler and the Nazi threat.

Rare insights into the life of the town are included, along with seldom told stories from the footnotes of history; from Frome’s part within the secret underground resistance movement and the national fight for women’s equality, to the gradual influx of American GIs and Field-Marshall Montgomery's stay in the aftermath of Dunkirk.

The book incorporates memoirs and memories, along with in depth research from official records and newspaper accounts, which allow the reader to see the war not only from ordinary people’s perceptive, but the military experiences of Frome’s heroic men and women - and in many cases their tragic sacrifices – as well.

More controversial aspects are also touched on, including injustice, espionage, racism and politics, to give a full and fascinating picture of a town facing profound trials of endurance and courage, but at the same time revealing the characteristics that have sustained Frome throughout its illustrious and turbulent history.