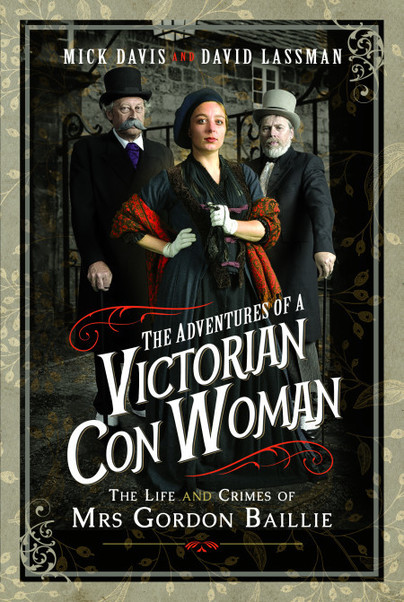 The Adventures of a Victorian Con Woman (Hardback)

The Life and Crimes of Mrs Gordon Baillie

Add to Basket
Add to Wishlist
You'll be £25.00 closer to your next £10.00 credit when you purchase The Adventures of a Victorian Con Woman. What's this?
+£4.50 UK Delivery or free UK delivery if order is over £35
(click here for international delivery rates)

'The story of Mrs. Gordon Baillie is stranger than anything to be met with in the field of fiction.'

Mrs. Gordon Baillie, known throughout her life as Annie, was born in the direst poverty in the small Scottish fishing town of Peterhead in 1848. Illegitimate and illiterate her beauty and intelligence nevertheless enabled her to overcome her circumstances and become a charming and wealthy socialite living a life of luxury whilst raising money for worthy causes and charitable works.

Behind her supposed perfect and contented life, however, lay one of the most notorious and compulsive swindlers of the Victorian Age. Her fraudulent fundraising and larger-than-life schemes played out across four decades and three continents, Europe, America and Australasia, and involved land owners crofters, aristocrats, politicians, bankers, socialist revolutionaries, operatic stars and the cultural icons of the day.

She became mistress to a rich aristocrat, married a world-renowned male opera singer and later took as a lover a vicar's son with anarchist tendencies. For most of her 'career' she kept one step ahead of the law and her nemesis, Inspector Henry Marshall of Scotland Yard, but finally becoming undone through her own compulsion for petty theft, despite her amassed fortune.

During her life she used more than 40 aliases, produced four children and spent her way through millions of ill-gotten pounds, dollars and other currencies. But at the turn of the twentieth century, her notoriety was such that she took refuge in America and disappeared from history.


This was a well-written book that would have needed a lot of research which comes across in the writing. A really good read and very enjoyable book, I would certainly recommend this book to others.

Wow! A real-life story that's stranger and more far-fetched than anything you'll read in fiction... Mrs Gordon Baillie is an extraordinary character brought brilliantly to life by authors Nick Davis and David Lassman. Don't miss it!

In this book, we are immersed in the life of Mrs. Gordon Baillie, also known as Annie, who becomes one of the most well-known con women in the Victorian age. We start from the beginning, at her birth in the 1800s, then her childhood, and so on. The plot is interesting enough to make you want to keep going. The writing is beautiful, easy to picture every scene.
If you like Victorian stories I definitely recommend this one!

This is an interesting, and eye opening, read on so many levels. Select it for tales of the personal, the flaws of our legal systems, the sheer inequalities that existed, between rich and poor and men and women, of for the “opportunities” for those who indulged in international travel – but I recommend you read it.

This book was really well written and got my attention immediately. We get to follow the intriguing story of Annie, or Mrs Gordon Baillie, who ended up going down in history as one of the most notorious con women in the Victorian age. The book is linear, starting with theories of her birth, following her childhood in poverty, in a small Scottish fishing town in the 1800s, all through to her mysterious disappearance.

Despite being illiterate, Annie used her intelligence and beauty to swindle compulsively, while maintaining an image of wealthy sociality dedicating her life to charity. Her schemes spread far across the land, through 3 continents, for four decades. A truly remarkable story!

It's a really comprehensive investigative work, and I congratulate the writers for their thorough research and quest for the truth behind what could have easily been registered in history as a terrible, terrible person. Instead, we're introduced to a complex person who deserved to have her story told.

This history is a fascinating read and in parts is a real page turner.

Incredibly well researched - this is such a worthwhile read.

I loved the way it was written. The language used creates such a vivid picture.

Article: ‘Story of a con woman’, words by Kevin McRoberts

There's an incredible amount of research that's gone into this, it's hard to imagine a more thorough account of Annie's life. It's packed with first-hand accounts and recognition of not only the facts, but rumours that have never been confirmed. What this does really well though is that it reinterprets all of that into a compelling story that flows well throughout. They did such a great job of bringing her to life. It also manages to be very funny in parts – I found myself laughing at some of the scrapes that Annie got up to. And boy did she get up to some wild things, who knew there's so many different ways to swindle people?

Overall I definitely recommend this to anyone who's into a bit of true crime or even historical fiction. It's a great balance of giving all the facts while bringing it together in an engaging narrative.

This author did such a wonderful job of grabbing this story from history and bringing it to life to provide quite the entertaining read.

This was such a fascinating, entertaining read. Well-written and researched, I loved this book from start to finish, and you can't help but admire Annie despite or perhaps because of the path that she chose. It balanced the information with the narrative very well.

As I have never actually read any true crime and generally stay firmly in fiction this was something new for me. But with the title of “The Adventures of a Victorian Con Woman” how could I not read it? I mean real life can be much stranger than fiction and ideas for fiction have to come from somewhere, right? It was quite interesting to learn of the misadventures and antics of Mrs Gordon Baillie. When you think of true crime you wouldn’t imagine that there might be some humor involved. It was very well written and obviously very well researched making it a rather enjoyable read.

Annie is a Victorian con woman that I knew nothing about before picking up this book. You can not help but admire Annie despite the path that she chose. I loved reading about her wide variety of ways in which she would con people out of something, and it was exciting to learn about her ways of escape just before she would have been caught.

I found myself laughing out loud in some parts, I feel as though I have learned a lot about her, it was well researched and an enjoyable read. it was nice to read about a female in history that the public is not aware of. It balanced the information with the narrative very well.

Mrs. Gordon Baillie, or Annie, is a Victorian con woman that I knew nothing about before picking up this book. I loved reading about her wide variety of ways in which to swindle people out of something, and it was exciting to learn about her ways of escape just before she would have been caught.

There were some parts that created a more humorous view of Annie's situations, and I enjoyed those as I found myself laughing out loud! The story is written so that while we are learning about her, it feels more like a story and less like a non-fiction history book. It was a good mix of info and story.

Oh my goodness, this book had me giggling in a few parts - but it was so well done, and put together. You can follow the criminal career of Annie with ease!

>From cloaks to asking for fair for transportation, to swindling people out of money for "good works," Annie ran the gambit, doing everything she could to maintain a comfortable lifestyle, while skipping out just in time to keep from being arrested. The police seemed to be one step behind her at every turn.

I enjoyed this read, and the exploits of the dominating Annie.

Notorious Mrs. Gordon Baillie (aka Annie and about 40 other aliases) was a fascinating con woman who lived in the Victorian era, a woman I had not heard of before. But now she will stick out in my mind as her life was absolutely crowded with ingratiating, stealing and racking up debts everywhere she went. And I mean everywhere. When finally found out by Inspector Marshall, in the courtroom evidence was heard from a huge range of people she swindled including a butcher, jeweler, milliner, bankers and many more. She even sold furniture from homes which weren't hers. She largely got away with it for ages! One of her favourite excuses was "forgetting" her purse. Every time things got "hot" she packed up and moved with her servants. Yes, she had servants! Mostly unpaid, of course. She must have had stamina and energy in spades, especially as she also had children, though they did not seem to be important to her.

On the outset she had three immense strikes against her...she was born poor (in Scotland), she was illegitimate and she was female. Her childhood was challenging and it seems to have affected her life thereafter. Her birth was not recorded, either, which made things interesting later. However, she was known to be very beautiful which was advantageous. She was clever, too, and had a way of "borrowing" money then not paying her debts without batting a beautiful eye. She was soon mingling with the rich and famous and married money as well. Her lifestyle was extravagant. However, her compulsiveness continued, probably for the excitement and thrill of not getting caught. Perhaps she became so accustomed to it she was able to justify her lies. She left swaths of debt in several countries.

In spite of her deceit, escapades and prison sentences, I can't help but admire her tenacity and cleverness. Admittedly she was a remarkable woman, very interesting to read about. Non-Fiction readers who wish for something unique and absolutely riveting, look no further than this gem of a book. The authors clearly did their research!

The Adventures of a Victorian Con Woman

Annie – Mrs. Gordon Baillie – was released from her second-long spell of imprisonment (this time from Aylesbury Prison). She was 51 years old and internationally known as a notorious swindler and con-artist.