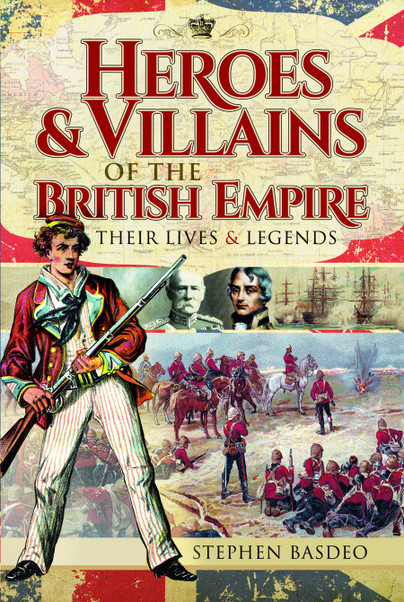 Heroes and Villains of the British Empire (Paperback)

Add to Basket
Add to Wishlist
You'll be £12.80 closer to your next £10.00 credit when you purchase Heroes and Villains of the British Empire. What's this?
+£4.50 UK Delivery or free UK delivery if order is over £35
(click here for international delivery rates)

I found Heroes & Villains to be a quick and engaging read about a pivotal period in British history. It's interesting to learn how the population viewed the empire from within, as it grew, thrived and eventually collapsed.

By the Victorian era, Britannia indisputably ruled the waves. Basdeo tells the story of how British Empire builders such as Robert Clive, General Gordon, and Lord Roberts of Kandahar were represented and idealised in popular culture. The men who built the empire were often portrayed as possessing certain unique abilities which enabled them to serve their country in often inhospitable territories, and spread what imperial ideologues saw as the benefits of the British Empire to supposedly uncivilised peoples in far flung corners of the world. These qualities and abilities were athleticism, a sense of fair play, devotion to God, and a fervent sense of duty and loyalty to the nation and the empire. While some may look on them in a different light today, they have a place in our history and should be seen in the context of their times and contributory to our culture today.

Francis Drake was a sea captain and explorer of the Elizabethan era from Tavistock, Devon. He was knighted by Elizabeth I. The Spanish branded him a pirate, known to them as 'El Draque'. He was buried at sea and divers continue to search for the coffin. He was regarded by people in the nineteenth century as one of the heroes of the empire. Died 28 January 1596 in Panama.