Add to Basket
Add to Wishlist
You'll be £19.99 closer to your next £10.00 credit when you purchase The Life and Legend of a Rebel Leader: Wat Tyler. What's this?
+£4.50 UK Delivery or free UK delivery if order is over £40
(click here for international delivery rates)

In 1381, England was on the brink - the poor suffered the effects of war, the Black Death, and Poll Tax. At this time the brave Wat Tyler arose to lead the commoners, forming an army who set off to London to meet with King Richard II and present him with a list of grievances and demands for redress. Tyler was treacherously struck down by the Lord Mayor. His head hacked from his shoulders, pierced on a spike, and made a spectacle on London Bridge. Yet he lived on through the succeeding centuries as a radical figure, the hero of English Reformers, Revolutionaries, and Chartists.

The Life and Legend of a Rebel Leader: Wat Tyler examines the eponymous hero's literary afterlives. Unlike other medieval heroes such as King Arthur or King Alfred, whose post medieval manifestations were supposed to inspire pride in the English past, if Wat Tyler's name was invoked by the people, the authorities had something to fear.

"There is an excellent selection of monochrome illustrations, an Appendix of Wat Tylerrelated
ballads, and an extensive Bibliography."

“…the book is devoted to the study of how the legend of Wat Tyler has been received through the ages, and in fact this enquiry proves to be both entertaining and enlightening … the author has contrived to pursue a single theme throughout in both a scholarly and entertaining fashion.”

“Stephen Basdeo’s book is a fascinating study of the cultural impact of one of England’s most famous rebels: Wat Tyler, who was a key figure in the Great Revolt of 1381”.

“Basdeo wrote his doctoral thesis on the legend of Robin Hood and resolved to write a similar piece on the legend of Wat Tyler … he provides an interesting chapter on historical novels featuring Wat.”

This book should appeal to scholars of medievalism, to those interested in English folk-traditions, and to the general reader

Stephen Basdeo's book is a fascinating study of the cultural impact of one of England's most famous rebels: Wat Tyler, who was a key figure in the Great Revolt of 1381.

**** Something for history lovers of any period
This book gives a history of the Peasants' Revolt of 1381, led by Wat Tyler, before going on to investigate Wat's portrayals in literature in subsequent ages. Stephen's account of the revolt is fairly short and snappy & he acknowledges that it is not his intention to say anything new about the revolt itself. Where the book really gets interesting is when the author talks about Wat's portrayals in popular culture after the middle ages, and how Wat Tyler's memory was invoked by radicals and socialists in the 18th and 19th century to give a historical grounding for their own cause. in fact the best chapters are 'The Eighteenth Century', 'Romanticism and Revolution', 'Radicalism and Chartism', and 'Wat Tyler in the Nineteenth-Century Novel'. This is where stephen really gets into the teeth of textual analysis and shows off his skills as a eighteenth and nineteenth-century medievalist. The earlier chapters on early modern period depictions of Wat, while well-researched, do at times feel like an interlude between the account of the actual revolt in 1381, and his chapters on the 18thc. onwards. But all in all an enjoyable read.

This not a book of mediaeval history. It begins with a brief account of what is known about Wat Tyler, leader of the Peasants’ Revolt in 1381, and then follows his legend through succeeding centuries as each generation reinvents him for its own reasons.

Basdeo wrote his doctoral thesis on the legend of Robin Hood and resolved to write a similar piece on the legend of Wat Tyler. Unlike Robin Hood, we know Wat Tyler actually existed and when, but otherwise all we know is his dramatic death at Smithfield. This has not prevented folktales gathering around him, such as the story of the taxman who molested his daughter. At first Wat’s story was used as a Royalist warning to would-be rebels and then in the 18th century he became a Radical hero, in the 19th century a Chartist hero and later a hero of the Gothic revival. Basdeo provides an interesting chapter on historical novels featuring Wat.

There is much to admire in this book, containing as it does material from a forgotten cultural history, and showing the way the literature of different ages have responded to the legend. Basdeo has an easy reading style, and although the theme is by its very nature somewhat repetitive, there is plenty of interest in these often forgotten literary pieces, and the author has contrived to pursue a single theme throughout in both a scholarly and entertaining fashion.

Article: Following the legend of our son Wat Tyler by Alan Smith as featured by

Stephen Basdeo is a historian and the author of several history books and academic journal articles. He has also co-edited and published transcriptions of primary sources for academic publishers. 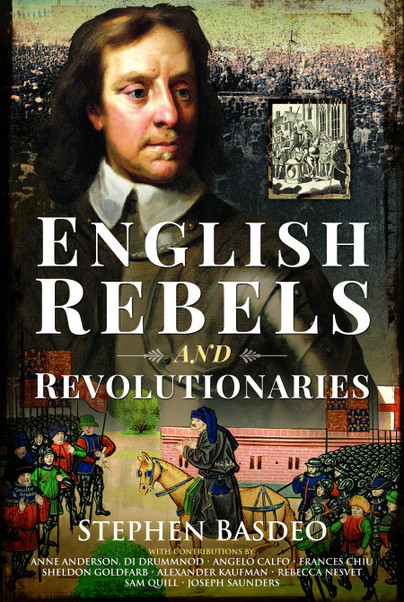 Throughout history brave Englishmen and women have never been afraid to rise up against their unjust rulers and demand their rights. Barely a century has gone by without England being witness to a major uprising against the government of the day, often resulting in a fundamental change to the constitution. This book is a collection of biographies, written by experts in their field, of the lives and deeds of famous English freedom fighters, rebels, and democrats who have had a major impact on history. Featured chapters include the history of Wat Tyler’s Rebellion, when an army of 50,000 people…

Click here to buy both titles for £44.99
More titles by Stephen Basdeo