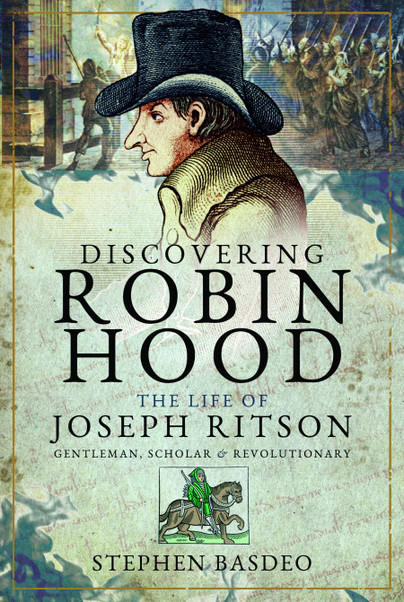 The Life of Joseph Ritson - Gentleman, Scholar and Revolutionary

As featured in The Express: 'How Robin Hood was saved from being a vanishing folk tale'

You'll be £25.00 closer to your next £10.00 credit when you purchase Discovering Robin Hood. What's this?
+£4.50 UK Delivery or free UK delivery if order is over £35
(click here for international delivery rates)

The name of Joseph Ritson, born in Stockton-on-Tees in 1752, will be familiar to very few people. The name of Robin Hood is known the world over. Yet it was Ritson whose research in the late eighteenth century ensured the survival of the Robin Hood legend. He travelled all over the country looking for ancient manuscripts which told of the life and deeds of England’s most famous outlaw. Without his efforts, the legend of Robin Hood might have gone the way of other medieval outlaws such as Adam Bell — famous in their day but not so much now.

Yet this is not only a story about the formation of the Robin Hood legend. Ritson’s story is one of rags to riches. Born in humble circumstances, his aptitude for learning meant that he rose through society’s ranks and became a successful lawyer, local official, and a gentleman.

However, underneath the genteel and bourgeois façade of Joseph Ritson, Esq. was a revolutionary: having travelled to Paris at the height of the French Revolution, he was captivated by the revolutionaries’ ideology of liberté, egalité, fraternité. He returned to England as a true democrat who sought the abolition of the British monarchy and the ‘rotten’ parliamentary system and wished for French Revolution and its reign of terror to spread over to England.

This the history of the life and times of Joseph Ritson: gentleman, scholar, and revolutionary.

This book is definitely a passion project from Stephen Basdeo, the amount of research that went into this is almost staggering and shows the care he took to expose a historical figure largely lost to time. Most Robin Hood scholars sadly have a tendency to ignore his contributions in favor of more investigative works that try to uncover “who the real Robin Hood was”. The fact that the author was able to piece together a coherent narrative from scant letters written back and forth between Ritson, his family, and friends is miraculous considering the gaps and blind spots in the record.

Overall this was a great book, not only for filling in a bit of history on a topic I was completely unaware of, but a glimpse into late Eighteenth Century life that you don’t see much. It was interesting to see Ritson’s views on The American Revolution (he was against it) and his firsthand account of of the 1780 Gordon Riots, a time when Anti-Catholic sentiment hit a fever pitch in London, and would-be revolutionaries took London to its knees. The reader doesn’t even get a mention of Robin Hood until nearly halfway through the book, so you can see how dense the biographical and socio-political analysis is here. Highly recommended for fans of obscure history and other amazing books by Pen and Sword Publishing. I personally love how they always release things that I had no idea about, and come at the topics from interesting viewpoints.

Interesting and pretty detailed account of Joseph Rittson. It was a nice account of the various collection of songs, poems, etc, that he collected. Also good history of his life and times in 18th and 19th England. Life was seriously tough for everyone back then, and it was interesting to read about how he rose thru society's ranks thru education and luck. I think armchair historians and those interested in above mentioned subjects will enjoy this book. It's a pretty easy and interesting read.

I really enjoyed learning about the real Robin Hood, this was a great job in researching and telling this story. It was well done and I had learned a lot.

Well researched and well written. Fascinating to read but also enjoyable.
I would recommend to those with an interest.

I'm always fascinated by books that made me discover new to me historical characters or how a legend was born.
This book features both these things and I loved the style of writing.
It's well researched, informative and well written.
Highly recommended.

How Robin Hood was saved from being a vanishing folk tale

While I've read a number of books about potential candidates for the historical Robin Hood, as well as several which trace different versions of the legend. Most that I've read seem to pick up with Scott and Pyle and skate over the contributions of Joseph Ritson, who is a far more interesting character than I realized. Well written and researched, with an excellent grasp of the period -- I enjoyed this book a lot.

While discovering Robin Hood and how his legacy/reputation has shaped up, the reader gets to discover Joseph Ritson, a gentleman scholar born in the latter part of the 18th century. He not only wrote a book about Robin Hood, but he influenced a circle of thinkers among whom was Walter Scott who attained more acclaim than the former. I found--am finding--this book terribly interesting. It is the kind of book that is fun to flip through, dip into at places, and go back and reread at spots. So glad that Basdeo decided to write Discovering Robin Hood. People who love the 19th century will crave this books for their shelves. I do.

This is a swift tour through the late eighteenth century through the eyes of Joseph Ritson, someone who collected and researched, among other things, the legend of Robin Hood. One of the best parts of the book is Basdeo's account of Ritson's research into Robin Hood in the eighteenth century, which is the main draw of the book. This part is interesting especially because not only was Ritson researching Robin Hood but had also become a revolutionary and his ideology informed his depiction of Robin Hood. Highly recommended if you want to learn not only about Robin Hood but also about eighteenth-century social and cultural history too!

Basdeo’s biography brings the tail end of the eighteenth century to life, exploring through the extraordinary life of Joseph Ritson the political, philosophical, and literary landscape of the time. Readers will not only gain a visceral experience of city and town life in the eighteenth century, but will come away with a thorough understanding of the ways in which the various landscapes of a generation shapes both its popular culture and that of posterity. Punchy, thoughtful, and melancholic, Discovering Robin Hood is a much-overdue tribute to the man who re-gifted Robin Hood to the world, whose legacy of truth and humanity deserves to be widely known once again.