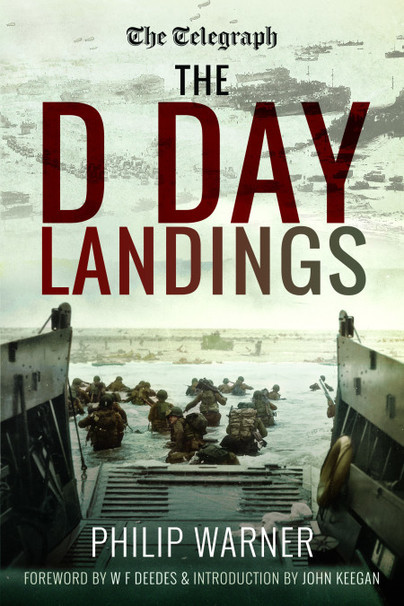 Add to Basket
Add to Wishlist
You'll be £14.99 closer to your next £10.00 credit when you purchase The Telegraph - The D Day Landings. What's this?
+£4.50 UK Delivery or free UK delivery if order is over £35
(click here for international delivery rates)

Seventy-five years have passed since that most mighty of armadas embarked across the English Channel. With hindsight, we know that Operation OVERLORD was a resounding triumph but, at the time, the risks and stakes were immense and the outcome far from a foregone conclusion. Set against the invading force was not only a ruthless enemy in formidable defensive positions but the uncertainties of the elements.

As Bill Deedes points out in his Foreword, it was the ‘ordinary man’ who turned this great undertaking into a reality and Philip Warner’s The D Day Landings reflects this by being a rich collection of personal accounts by just such individuals. We hear the experiences of RAF pilots who dropped the parachutists and towed the gliders; of sailors of the Royal Navy who had to negotiate minefields and other obstacles; and of a wide spectrum of soldiers. Some such as infantry, tank crews, gunners and sappers came face-to-face with the enemy while others, for example doctors and chaplains, provided vital support. Hostile fire does not distinguish between those roles any more than it does between high and junior rank. It is a fascinating privilege to share these widely diverse individuals’ experiences and emotions at such a defining moment both in their lives and in the history of the world.

Today no matter how hard we try, we cannot really know what was really going on through the minds of those thousands of men who so selflessly stepped into the unknown in the pursuit of freedom. But we are unlikely to come closer than by reading this evocative book so sympathetically compiled by a man who knew the fortunes of war better than most. Each section is introduced by clear explanation of the action concerned and the text is enhanced by maps and photographs.

This book is really useful and we refer to it a lot at the museum for small details about certain aspects of the campaign. It has reports and recollections from the soldiers in their own words, which means it is a book to dip in and out of, rather than a dry straightforward history book. It is interesting to see the different aspects reported on by the men, and see how it all fits together, and we have recommended it to other researchers and visitors.

The book is a pleasure to read, in the testimonies of people still alive (very few today for obvious reasons) in 1980 emerges the freshness and also the humor in telling epic and tragic facts at the same time. The book is therefore a must for all historical fans of D-Day and beyond.

Well recommended and a fine read that doesn’t try and put a slant on the narrative but let’s those participating have their say. I thoroughly enjoyed re reading this.

I absolutely loved this book, and highly recommend it to anyone with an interest in this most momentous day. In one word: brilliant!

It is very much a coffee table book that you can pick up and put down at will, without losing the thread. Some of the stories are very short whereas some are long and detailed. They are a capture of living history and I enjoyed the opportunity to live the moment through the eyes of those who were there. I remain in awe of those people, what they did was incredible (although they do not see it that way,) and I am very grateful for it.

This book tells the story in depth and captures the attitudes and hopes of people who were there. It also very effectively captures the epic nature of D-Day, a battle on a scale never before attempted.

What most certainly IS special, is reading what all those people interviewed actually experienced on that historic night and morning of June 6th, 1944, when the Allies decided to start to take back what Hitler took from the people of Europe; their freedom... Highly recommended reading, especially now that it is 75 years ago and the last of the veterans are sadly leaving us, never to be forgotten !

The words provided by those involved, vary in length and detail, but each of their contributions are worth taking the time to read, such as those of Lance Corporal PG Barton, who landed on Juno Beach with a bang due to the landing craft hitting a mine, which made for a rotten start to his day.