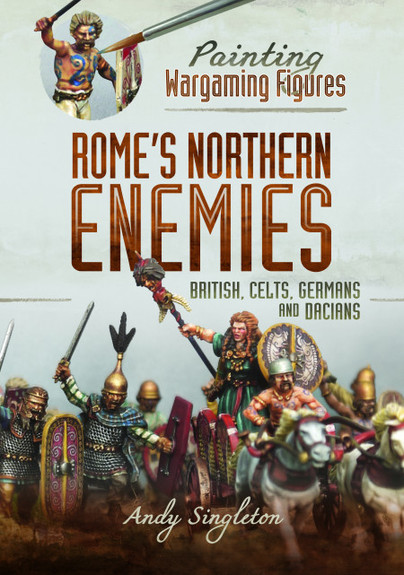 Add to Basket
You'll be £6.98 closer to your next £10.00 credit when you purchase Painting Wargaming Figures – Rome's Northern Enemies. What's this?
Need a currency converter? Check XE.com for live rates

Throughout their history, the Romans were troubled by formidable warlike tribes along their northern borders. The Celts of Gaul and Northern Italy, who sacked Rome itself, the British who repulsed Julius Caesar and resisted later occupation, the Germanic tribes along the Rhine and the fearsome falx-wielding Dacians on the Danube, all proved worthy foes of the legions. If you are raising your own army to defy the might of Rome, Andy Singleton will help you get them ready for battle with ease.

The emphasis is on achievable results and practical advice to get your army painted and ready for gaming in a reasonable time frame, and achieve a fine collection that will look great on the shelf or table. Most of the figures featured in the numerous illustrations are 28mm but the techniques described are easily adaptable to smaller scales and to plastic or metal. Step-by-step guidance takes the process from initial preparation and assembly of the figure, to finishing and basing. Themed chapters cover armour, clothing, skin tones, warpaint and tattoos, shields and horses.