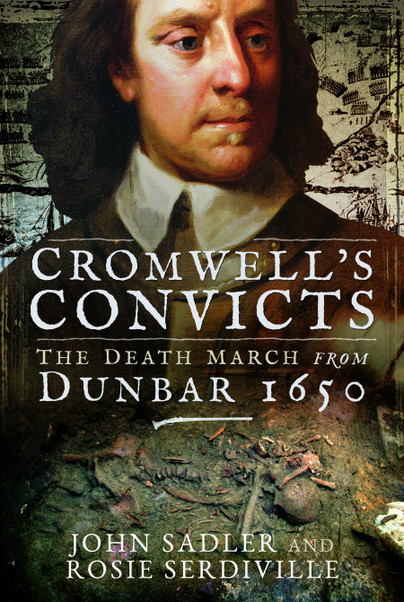 The Death March from Dunbar 1650

An article written by the authors for Dan Snow's History Hit: 'Cromwell's Convicts: The Death March of 5,000 Scottish Prisoners from Dunbar'

You'll be £4.99 closer to your next £10.00 credit when you purchase Cromwell's Convicts. What's this?
Need a currency converter? Check XE.com for live rates

On 3 September 1650 Oliver Cromwell won a decisive victory over the Scottish Covenanters at the Battle of Dunbar – a victory that is often regarded as his finest hour – but the aftermath, the forced march of 5,000 prisoners from the battlefield to Durham, was one of the cruellest episodes in his career.

The march took them seven days, without food and with little water, no medical care, the property of a ruthless regime determined to eradicate any possibility of further threat. Those who survived long enough to reach Durham found no refuge, only pestilence and despair. Exhausted, starving and dreadfully weakened, perhaps as many as 1,700 died from typhus and dysentery. Those who survived were condemned to hard labour and enforced exile in conditions of virtual slavery in a harsh new world across the Atlantic.

Cromwell's Convicts describes their ordeal in detail and, by using archaeological evidence, brings the story right up to date. John Sadler and Rosie Serdiville describe the battle at Dunbar, but their main focus is on the lethal week-long march of the captives that followed. They make extensive use of archive material, retrace the route taken by the prisoners and describe the recent archaeological excavations in Durham which have identified some of the victims and given us a graphic reminder of their fate.

In keeping with their roles as Time Bandits, the authors are concerned to make the history come alive and the result is an enjoyably and readable book, albeit about a grim story.

A rare and fascinating review of the Scottish campaign by Cromwell. The set battles of the English Civil War that saw Parliament triumphant and Cromwell placed in national command have been covered well by historians but little has been done to examine the Commonwealth campaigns. – Highly Recommended.

This is a detailed and well researched book, with appropriate references to evidence, photographs and maps. It concludes by tracing the descendants of some of the prisoners. Perfect for historians or anyone interested in this period, Cromwell. Scottish or military history. Recommended.

This is a well written and entertaining book. The authors make effective use of archaeology and written sources to describe the men’s plight, and their comparisons with other more familiar wars and war crimes work well. Sadler and Serdiville’s motive mirrors that of their closing quote, which was to give these prisoners “back their history”. They succeed admirably.

It would be so simple if the sum total of what Cromwell was remembered for was simply the winning of the British Civil Wars and the deposition and beheading of Charles 1, but it seems there is always something we don't know about him, and this fascinating book helps to flesh him out even more. We may not like what we read, but at least the record is put straight.

This fascinating story, if on the one hand makes us think of how many fell in that battle, and especially in that "march of death" towards the south, nameless people abandoned on the side of the road, killed in mercy, or dragged themselves to Durham to die in agony in a cold cathedral, but it also makes us think of all those who made it , to all men and women who owe their lives to the desire to live of their ancestor who, despite having lived through all the brutality of the war, imprisonment and deportation managed to earn their freedom and life for themselves and their descendants.

Following Oliver Cromwell's victory on 3 September 1650 at the Battle of Dunbar, 5,000 prisoners began a forced march to Durham. The journey took seven days and prisoners were treated appallingly. With no food, drink ory medical treatment provided many died en route. On arrival, Durham didn't provide much relief and many died, up to 1,700 from illness.

This book details the journey and for the survivors the further punishment of hard labour or exile to the new world where they were treated as close to slaves. The stories and details are heartbreaking and it's difficult to understand how this treatment was justified.

Although I enjoyed learning more about this I found it a very sad piece of history. The conditions on the march from Dunbar are unimaginable even though the book provides incredible details from their extensive research.

It's a very well written book.

This is a fascinating account of the Battle of Dunbar and the aftermath, which resulted in 5,000 prisoners of war being marched to Durham. This book gives you the historical background, before looking at the actual battle and then recounting the forced march.

There have been archaeological excavations in Durham, where some of the victims of the march have been found and identified. This is a shocking account of the aftermath of war and of the terrible way the prisoners were treated – not only on the march (where so many died on the way to Durham) but afterwards. Undoubtedly, they were viewed as financial spoils of war, with many transported to America or the West Indies.

Well researched and informative read. War is brought on because of religion and politics with people being punished just because they are on the losing (or wrong) side. The atrocities that were brought upon these people are just a beginning to this book. The authors take the time to research and show how power and corruption have a devastating effect on a population and the consequences that follow.

Cromwells's Convicts gives us a thorough look in a terrible time in history. History always seems to repeat itself in some form, because man never seems to learn from its past. This book is researched well and written well.

This is a dark period of British history about which I knew little. It’s easy, almost 400 hundred years later and half a world away, to focus on actions, events, facts and consequences, on the politics and rulers. This book takes us into the details of one particular part of the Third English Civil War and reminds us of the human cost.

Recommended reading for anyone interested in 17th century British history.

An interesting look at a specific moment in English history. Good for those who have an interest in Scottish history or Cromwell himself. If wanting to know more of the civil war that brought Cromwell and these men together, this is a great start.

This took you through a terrible time when war,religion was a battle! This gives you the story of what these people had to endure as prisoners,how they were treated. The history was well researched and I learned so many new things about this man! It is well written where you dont lose interest in the book and the story. Different places different battles I had never heard of and I wanted to read about his life. If you want to know more about this man and his life read this book!The maps helped so much! What these men had to go through just to even survive! Very good read and was easy to follow the story.

This can be easily read over the course of 1 or 2 days but its brevity should not detract from the amount of information that is contained here. To give the book some added relevance to the general reader there are accounts of more recent events from history. If you are interested in discovering about a dark episode in British history then this book is for you.

This was such a fascinating read about bones found recently during construction of a cafe. These bones are of prisoners of war sold off as a piece of property and disregard.

The book is detailed about the sacrifices of war along with other people and decisions during that time in 1650.

The photographs add an important detail making this historical novel a gem to own.

What an incredible read. This is the fascinating true story of a forced march of 5,000 prisoners from the battlefield to Durham. These prisoners took a march, which lasted 7 days, without food, very little water and absolutely no medical treatment. Needless to say, most died along the way.

The author does a wonderful job of researching and retelling their story that you will be disappointed again in humanity and celebrate that only recently were they given the honor and attention they deserved. The maps and the photos add to the wonderfulness of this book.

The account of the Battle of Dunbar is good although the maps could have been better to assist in describing the phases of the battle. The narrative of the fate of the prisoners is good, being careful to avoid evaluation against modern standards and morals. Sadly, forced military service, forced indenture and despatch to developing colonies in need of labour were very much part of the lot of the prisoner at that time. That some emerged in America as free men and the founders and developers of the expanding colonies is greatly to their credit. However, the common theme is that they missed Scotland. A good read that adds much value to the understanding of the world after the religious upheavals of the 1650’s.