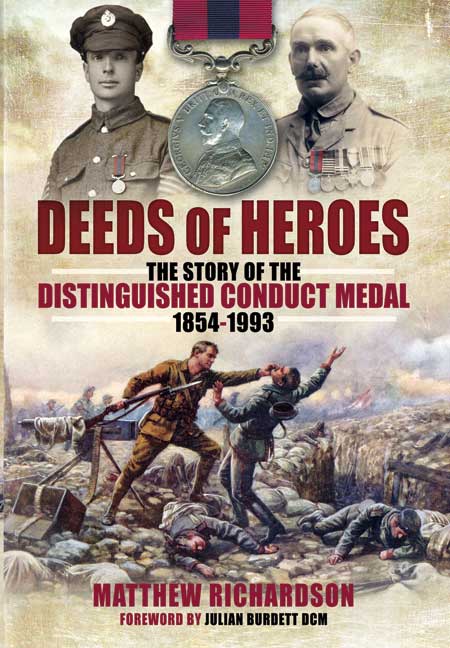 The Story of the Distinguished Conduct Medal 1854-1993

Click here for help on how to download our eBooks
Add to Basket
Add to Wishlist
You'll be £4.99 closer to your next £10.00 credit when you purchase Deeds of Heroes. What's this?
Need a currency converter? Check XE.com for live rates

For over 100 years the Distinguished Conduct Medal – the DCM – was the second highest medal that could be awarded for gallantry to the other ranks of the British army and in some cases also the RAF and Royal Navy, yet the holders of this major award have rarely been given the recognition they deserve. And while the heroic exploits of recipients of the Victoria Cross have been the subject of repeated accounts, DCM holders have largely been ignored in print.

But now in this graphic narrative history Matthew Richardson sets the record straight by describing the conspicuous courage of men who have been awarded the DCM in the Crimean and the colonial wars, in the two world wars, and during recent conflicts in the Falklands and the Gulf. Told often in their own words, their extraordinary acts of bravery and selfsacrifice are the central focus of his book. Characters such as Frank Bourne, who received the award for his conduct at Rorke's Drift, are celebrated here, as is John Brown who received his DCM for work inside a German prisoner of war camp in the Second World War, John Meredith who was awarded his DCM for leadership while a prisoner of the Japanese on the Burma railway, and Peter Ratcliffe who was given the DCM for an SAS mission in the Gulf. But alongside these famous names are the many, many other DCM holders of equal gallantry whom history has overlooked.


Profusely illustrated with photographs from the author's collection including DCM holders from the Boer War, Gallipoli, the Western Front, and the battlefields of the Second World War, Matthew Richardson's book will appeal to everyone who is interested in British military history.

He has employed personal testimonies, newspaper accounts and memoirs to illuminate spare language, often to great effect and with considerable effect. There are many astounding tales of courage and comradeship in this volume and it is eye-opening read in places, even to those accustomed to such tales. The research put into unearthing the actual events of some awards – particularly since the 1960’s – shines through and makes this a worthwhile narrative.

The author has written a very readable narrative history of some of the actions undertaken by recipients of the gallantry award. It will be of great interest to both medal collectors and the general military history reader alike.

This is a most readable book for those with any interest in military history. Recommended.

Matthew Richardson offers up an embarrassment of riches in his excellent history of the Distinguished Conduct Medal. The strength of the book is a procession of pen portraits of a long list of holders from Crimea to Iraq. Matthew Richardson deserves credit for this wonderful book. Even if you are not interested in medals, the portraits he writes bring a truly glorious group to light and it would be nice to see works like this for other award winners we revere.

Professional social historian Matthew Richardon's book tells the story of the Distinguished Conduct Medal (DCM) from 1854 to 1993. He brings lives and deeds of its recipients out of the shadow of the Victoria Cross. There is also a short chapter with guides to collecting medals and tracing DCM ancestors. READ IT FOR: A 'biography' of a major gallantry medal.

As so much attention is given to the Victoria Cross relative to any other awards, it is good that now there is a book which quite rightly redresses the balance and pays due respect to the actions of so many previously unsung heroes. Book of the Month.

A welcome narrative history of the DCM, Britain's second highest award for gallantry. The author tells the stories of some of the men who have won the award often in their own words. - Well worth a look.

This well written and carefully researched book will delight collectors and military historians alike. It is a significant addition to the history of the British Gallantry awards.

Those awarded the DCM frequently survived their ordeals, and many of their accounts of the actions that led to their awards, from Crimea to the Gulf War are featured in this book.