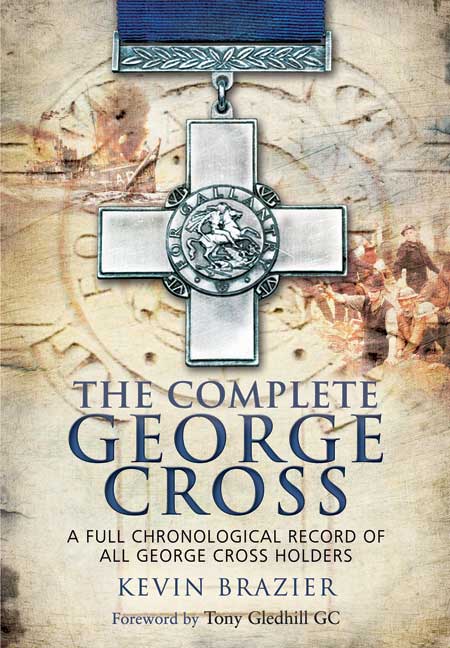 A Full Chronological Record of all George Cross Holders

Click here for help on how to download our eBooks
Add to Basket
Add to Wishlist
You'll be £4.99 closer to your next £10.00 credit when you purchase The Complete George Cross. What's this?
Need a currency converter? Check XE.com for live rates

The George Cross, the highest civilian decoration, is awarded for 'acts of the greatest heroism or of the most conspicuous courage in circumstances of extreme danger', and all the recipients of this exceptional honour are recorded here. As a complete chronological record of George Crosses awarded in Britain and around the world, this book is an essential work of reference for anyone who is interested in the history of the medal and in the acts of bravery and self-sacrifice it commemorates.

The first direct awards of the George Cross were made during the Second World War when Britain was threatened with invasion and civilians were in the front line of the fighting, and it has been awarded to individuals who have distinguished
themselves in equally perilous situations ever since. Their extraordinary exploits, as recounted in this book, make unforgettable reading.

This remarkable reference book should appeal to anyone who is interested in the history of British medals, and in acts of heroism.

In the sticky heat of an October day, I found myself in the Commonwealth cemetery in Stanley on Hong Kong Island. There is much to see. If you’re a regular pilgrim on the battlefield trail you will have seen grave markers denoting other awards, but here you will find four quite unusual headstones bearing the image of the George Cross. These four holders of the award were immensely brave men, who, as prisoners of war, defied their Japanese captors and paid a heavy price even before their executions.

THE COMPLETE GEORGE CROSS
on July 12, 2012 at 12:37
In the sticky heat of an October day, I found myself in the Commonwealth cemetery in Stanley on Hong Kong Island. There is much to see. If you’re a regular pilgrim on the battlefield trail you will have seen grave markers denoting other awards, but here you will find four quite unusual headstones bearing the image of the George Cross. These four holders of the award were immensely brave men, who, as prisoners of war, defied their Japanese captors and paid a heavy price even before their executions.

Much closer to home, in Boulogne, you will see a similar headstone for an airman, Gerald Close. He was awarded the Empire Gallantry Medal for attempting to save the life of a pilot trapped in the wreckage of a burning aeroplane. Close was one of many who were required to exchange their medal for the new George Cross at its inception.

Of course, the George Cross is distinctive because it is not simply an award for military personnel, but is intended to honour acts of heroism across the civil and military spectrum. In this excellent directory, the author brings all the holders together; be they airmen, miners, farm boys, deckhands or policemen, all under one roof. Notes on burial locations and the whereabouts of the medals are included with accounts of the medal action and, where applicable, information on living recipients.

A history of the award and the system of exchanges for the Albert, Edward and Empire Gallantry medals are explained. It is, however, important to note that these do not include holders of these medals who were not alive at the time the GC was introduced in 1940.

I have made good use of a similar book for the Victoria Cross and this excellent reference work will prove as valuable to anyone interested in the George Cross. There are hundreds of interesting stories to learn from the days of industry and empire, the two world wars and right up to the modern day. The most recent recipient of the award is the iconic Oz Schmid of the Royal Logistic Corps. He is just one of the remarkable people described by Kevin Brazier in this most valuable and timely work. I cannot recommend it highly enough.

Usually the reason why someone performs the act for which they are awarded gallantry medal is obvious – to save a life or prevent a disaster – but how there individual could bring themselves to put their own survival behind that of others in more difficult to comprehend. Yet a willingness to sacrifice one’s own life for the sake of others is the dominant theme of this fine book.

The few words I have available to me here are not nearly enough to do gull justice to the brave holders of the George Cross, Britain’s highest civilian award for bravery, that are recorded in this 242-page hardback book. It offers a full chronological record of all George Cross holders, with each recipient receiving a short description of the actions that saw them being given this prestigious award.
Some of the holders are also featured in a 16-page black and white photo section, with chapters outlining the history of the George Cross, the recipients and burial locations of George Cross holders.

Turning the pages one fine some extraordinary stories as the young constable in Khartoum in 1931 who strangled a rabid dog which has just attacked a man.

For an anthology of acts of bravery, it would be difficult to fine and better than The Complete George Cross by Kevin Brazier, who has already completed a study on recipients of the Victoria Cross.

This book offers readers amazing details about how people are willing to risk their lives to save others.

I have no hesitation in recommending this as an essential purchase for any reader interested in the George Cross in particular and of medals and gallantry awards in general.