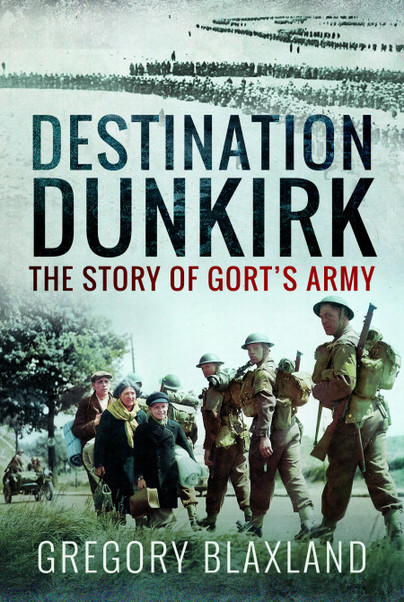 The Story of Gort's Army

Add to Basket
Add to Wishlist
You'll be £30.00 closer to your next £10.00 credit when you purchase Destination Dunkirk. What's this?
+£4.50 UK Delivery or free UK delivery if order is over £35
(click here for international delivery rates)

It is a peculiar genius of the British to be able to turn a devastating defeat into something to be celebrated. Dunkirk is but the most recent example; militarily, the only redeeming feature was that it was not a catastrophe. The largely successful evacuation of thousands of British (and, let it not be forgotten, French) soldiers, albeit minus most of their equipment, now occupies a well established place in British historical memory. The outcome of the ignominious end of Britain's expeditionary army was soon transformed into a celebration of the 'Dunkirk Spirit'; the Blitz of the following months reinforced the idea that Britain alone was prepared to stand up to the forces that threatened the democratic world.

Originally published in 1973, this welcome reprint of Gregory Blaxland's beautifully narrated account of the campaign in France and Flanders is combined with an adept use of the wealth of memoirs and regimental histories that emerged in the decades after the war's end. It has the advantage that it is written by one who served in the campaign, admittedly as a very junior officer, and was himself evacuated from the beaches of the Dunkirk perimeter.

Popular memory concentrates on the evacuation; but there were several weeks of desperate fighting that preceded the final evacuation from Nantes and St Nazaire on 18 June. These engagements, fought amongst the confusion of coalition warfare and often suffering from lamentably poor communications, produced many heroes, of whom too many are nameless. Valuable time was bought that enabled the Dunkirk perimeter to be established.The fact that well over half a million allied soldiers were brought over to England is in itself a tribute to their tenacity. This is their story.

Included in the work are many maps outlining the unfolding struggle; while helpful, they are of average quality and would have benefitted from a rework. The author has also included a series of appendices that lay out in detail the formations included in the BEF, an outline of the main weapons systems and their capabilities in a comparison of German, French and British forces and finally a detailed rendition of source material broken out by chapter. Thoughtful, balanced and deeply informative, this is truly a worthwhile rendition of the BEF experience in France and a noble testament to its officers and soldiers.

A well resourced and comprehensive account of what happened to the British Expeditionary Force during the relevant months of 1939 and 1940 with the addition of the author’s indications of what he considers to be the problems which developed with regard to general communications and orders together with some of the associated difficulties of international cooperation between armed forces. The book is well worth reading for those who take a keen interest in military history but certainly not to be read as something to while time away.

The late author is an acknowledged author in military subjects, and this book was first published in 1973. That was forty-six years ago, and it is good to see it back in print again. This book should rank as one of the definitive, if not the definitive account of the British involvement in the France and Belgium at the beginning of the Second World War. Alongside the official history, written by Major ELLIS, it provides a full account of the various aspects of the campaign from September 1939 until June 1940.

It is a heavy read in some ways, but it is detailed and thorough in its narrative. It provides a counter-point to the official history, and contains some interpretation and differing viewpoints from that which was allowed to be published in that volume. BLAXLAND was able to speak with several of the key participants, and was also granted access to some regimental histories. This is in addition to the war diaries and other papers from that period. The book contains some useful maps and photographs, but it is the narrative which is central to this book.

In conclusion, a well-researched and thorough account of the campaign of May 1940 in France and Belgium from a British perspective, that should be read by anyone studying that campaign.

This excellent book should be the basis of all your Dunkirk/BEF reading to get the campaign mapped before you go looking for the more in-depth human interest stuff... It is essential reading.

Blaxland wrote a stirring account. Although there are many more recent works of high standard and the evidence is at times anecdotal only this is a book which is a required inclusion in any library on the campaign in 1940 and a tribute to Gort’s Army.

Using British and German war diaries and reports Gregory Blaxland, in his book "Destination Dunkirk" describes the loss of the under equipped British Expeditionary Force, together with its Belgian and French army counterparts. All three were overwhelmed by a well planned German onslaught which broke through the allied defences along a 50 mile front. Supported by Stuka dive bombers and tanks, it began to decimate three allied armies. Churchill was dumfounded and swiftly made plans to save what was left of the BEF through the channel port of Dunkirk. Diaries, eye witness accounts and personal correspondence illustrate the lack signals equipment and confusion which played and important part in the conflict.