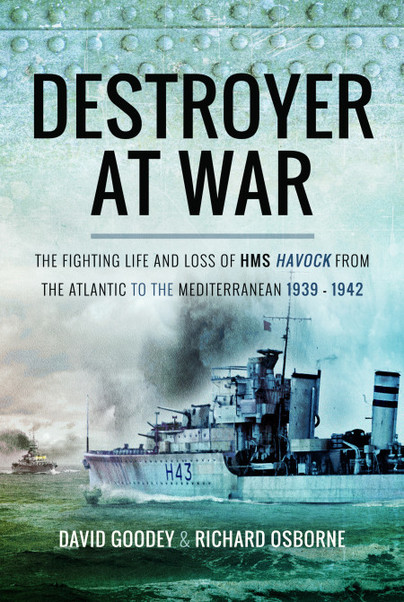 Click here for help on how to download our eBooks
Add to Basket
Add to Wishlist
You'll be £4.99 closer to your next £10.00 credit when you purchase Destroyer at War. What's this?
Need a currency converter? Check XE.com for live rates

It was headline news on 8 April 1942: ‘One of the Navy’s most famous destroyers, a ship which survived bombs, torpedoes and full scale battles, has been wrecked’. That destroyer was HMS Havock, described in another newspaper as ‘Britain’s No 2 Destroyer of this war – second only in fame and glory to the Cossack.’

Havock had earned her reputation guarding the convoys across the Atlantic in 1939 and at Narvik in the abortive bid to stave off the German occupation of Norway in 1940. Havock was then transferred to the Mediterranean, fighting at the Battle of Cape Spada in 1940 and in 1941 at the Battle of Matapan and in the evacuations of Greece and Crete.

Havock’s duties in the Med continued, escorting the convoys to the besieged island of Malta and the equally beleaguered garrison at Tobruk. Then in the Battle of Sirte in 1942 Havock was badly damaged and she limped into Malta for repairs. There she was heavy bombed and when Havock made a bid to reach Gibraltar, she was wrecked off Cape Bon. Her crew was captured and imprisoned in the infamous Laghouat internment camp.

The authors have tracked down fifty of the surviving crew and from interviews have been able to compile one of the most detailed, and certainly one of the most dramatic, histories of a destroyer during the Second World War. Destroyer at War tells the story of the battles and operations of a famous ship, and its sad destruction, through newspaper reports, official documents, and the words of the men who sailed and fought in HMS Havock as she earned an astonishing eleven battle honours in her brief but glorious career.

This is an excellent detailed history of the service record of the Havock, making it clear just how busy some of these destroyers were.

Over the decades the authors tracked down 50 of the surviving crew and using interviews have been able to compile one of the most detailed and dramatic histories of a destroyer in action during WW2...

... The eyewitness accounts the authors pack into this book are key to making it an incredible tale of an action packed fighting life of a famous vessel.

I found this a really fascinating read... All in all what can only be described as a detailed account of an action packed career for this Royal Navy destroyer during WW2. Heartily recommended.

It is a worthy tribute to the short but glorious career of the ship and her crew.

The book is an exciting read where the prose flows and even the casual reader will find an engrossing story without resort to great quantities of technical information. Destroyer at War provides some evidence of the contribution of the hard-working H-class destroyers through the Second World War. I happily recommend this to both naval historians and general readers. It is a compelling tale and one I have enjoyed immensely reading.

The authors, David Goodey and Richard Osborne have tracked down fifty of the surviving crew and from interviews have been able to compile one of the most detailed and certainly one of the most dramatic, histories of a destroyer during the Second World War.

The authors have made good use of first hand accounts and provided an exceptional photo-plate section to support their text. This book encapsulates the incredible service of RN destroyers during WWII – Most Highly recommended.

David Goodey’s father, Albert William Goodey, joined the Royal Navy on 26 April 1938 at the age of 20. Having completed training at Chatham as a Rating in the engineering division he took his first commission in the new Hero-class destroyer HMS Havock on 29 September 1938. Albert remained part of Havoc’s crew until 14 November 1941 – just five months before she was lost.