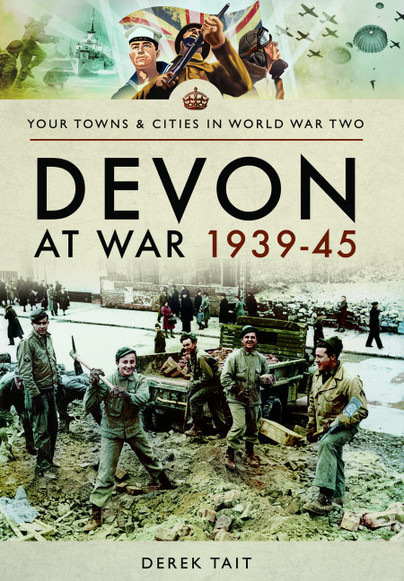 When war was declared on 1 September 1939, the people of Devon pulled together in a way that they hadn't done since the Great War of 191418. This book covers the people of Devon's contribution to the war effort, from the commencement of the conflict in September 1939, to its end in September 1945. It features many forgotten news stories of the day and looks at the changes to civilian's everyday lives, entertainment, spies and the internment of aliens living within the area.

Devon became vital as a base for troops and as a despatch point for the many men who left to fight in Europe. Several RAF bases were also established within the county to repel German attacks. Air raid shelters were erected in gardens and at public places and many children living in larger cities were swiftly evacuated to the countryside, as Plymouth and Exeter both suffered greatly from German bombing, with much of Plymouth being obliterated. Carrying a gas mask, rationing, the make-do-and-mend culture and the collection of scrap metal all became a generic way of life.

Many of the jobs left open by men fighting abroad were taken up by women on the Home Front. The Women's Voluntary Service assisted with the evacuation of mothers and children to the country, carried out civil defence duties and provided food and clothing for the many refugees from occupied Europe.

During the build-up to D Day, American troops were trained and stationed within the county before leaving for the beaches of Normandy. Slapton Sands, Dartmoor and Woolacombe were all used as training grounds with tragic loss of life at Slapton.

Devon played a truly vital role in the war and its people contributed greatly to bringing the world changing conflict to an end.


There are several photographs included throughout the book, which are not grouped in the centre of the book as often seen with this publisher. I have not seen many of these photographs before, and they enhance the content in a positive manner.

Having lived in Devon for most of my life this title appealed to me. Over the years I
have heard of many events duringWorldWar 2 that took place in the county. This book
gives a summary of these events and it is a very interesting read.

It captures the spirit of how Devon contributed to the war effort and it documents how
the war affected people’s lives. It has many news stories – some unusual and others just
“ordinary” to the wartime. One notable section is on how Plymouth city centre was
destroyed and how it was re-built after the war.

The book is divided into several chronological sections. Although the chapter headings
may be “1944 D-Day” the contents of the chapter really relate to events in general
taking place in Devon around that time rather than just the specific preparations for DDay.
The author has drawn on numerous sources and has done extensive research. He has
often used newspapers and has obtained many details of Court cases. The breadth of
topics he covers is quite broad and he has summarised many events taking place in the
county. There are numerous details of fundraising events for the war effort and the
stories of evacuees.

Overall, I found this book to be of general interest and it can be considered a chronology
of events in the county. If you want to know more about the general history of Devon
during World War 2 then this book is highly recommended.