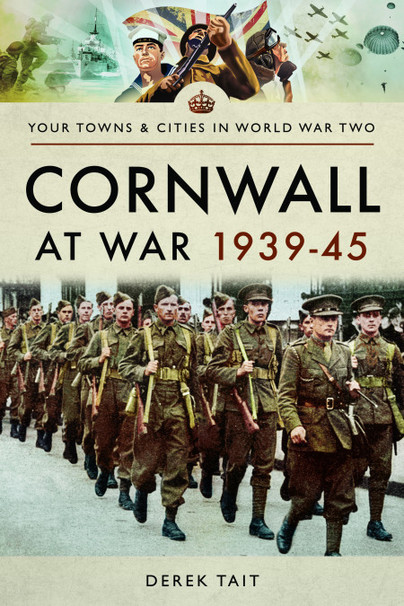 Click here for help on how to download our eBooks
Add to Basket
Add to Wishlist
You'll be £4.99 closer to your next £10.00 credit when you purchase Cornwall at War 1939–45. What's this?
Need a currency converter? Check XE.com for live rates

When the Second World War commenced on 1 September 1939, the people of Cornwall rallied together in a way that they hadn’t done since the Great War of 1914–18. Young men in their thousands enlisted in the army while older men joined the country’s home defence force, the Home Guard. Women took over the jobs of men and many helped charitable organisations and other worthy causes by joining the Women’s Voluntary Service. The Land Army assisted with agricultural work, a service that was vitally needed within the county.

Many RAF bases were set up in Cornwall, which proved essential for the defence of the country and as stopping-off points during bombing raids and other missions. Many evacuees from other parts of the country, including London and nearby Plymouth, were welcomed to the county and were looked after by local families. Thousands of American soldiers were based in Cornwall before leaving for the shores of Northern France during D-Day in June 1944. They received a warm welcome from the people of the county and many invited them into their homes.

This book covers the people of Cornwall’s contribution to the war effort, from the commencement of the conflict in September 1939 to its end in September 1945. It features many forgotten news stories of the day and looks at the changes to civilians’ everyday lives, entertainment and the internment of aliens living within the area. Air raid shelters, carrying a gas mask, rationing, the make-do-and-mend culture and the collection of scrap metal all became a way of life.

Huge celebrations took place all over the county when the war came to an end but many of the lives of the people living in Cornwall were changed forever.

There are several photographs included throughout the book, which are not grouped in the centre of the book as often seen with this publisher. I have not seen many of these photographs before, and they enhance the content in a positive manner.