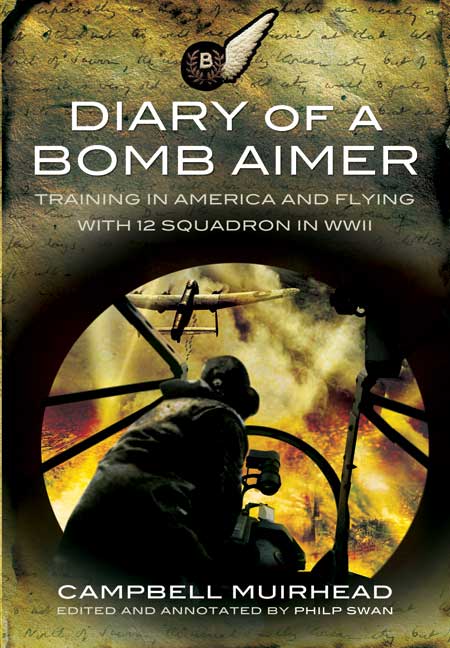 Diary of a Bomb Aimer (ePub)

Click here for help on how to download our eBooks
Add to Basket
Add to Wishlist
You'll be £4.99 closer to your next £10.00 credit when you purchase Diary of a Bomb Aimer. What's this?
Need a currency converter? Check XE.com for live rates

Campbell Muirhead kept a meticulous diary of his wartime RAF service from the day that he set forth to train as aircrew in Canada and the USA in 1942 to the end of his wartime service with 12 Squadron Bomber Command. The book is particularly emotive as he wrote in the common parlance of those wartime days and truly reflects the emotions, fears and feelings of those caught up in that mighty conflict. His diligent observations of life in the RAF from joining-up, crossing the Atlantic and training in the New World bring back wartime life as it really was. His descriptions of the perils of flying on bombing raids deep into the heart of Germany truly reflect the many different aspects of life in a front-line squadron in a way that can only be told by one who was there.
Campbell Muirhead joined the Civil Service after leaving the RAF and lived for 30 years in Duddingston village in Edinburgh. He retired and moved to Swinton, a village in the Scottish Borders. He died in 1993. The Editor, Dr Philip Swan was a Principal Lecturer in History at the University of
Lincoln from 1980 until 2009. He has published widely and his interests range from the social history of medicine to the history of Royal Air Force Bomber Command in Lincolnshire. His most recent research has been on RAF Hospital Rauceby.

In order to relive the stress of wartime ops, the author decided to write a meticulous and emotional diary of his 30 mission tour as a commissioned bomb aimer with 12 sqn Lancasters (a tour which took only took an amazing 10 weeks to complete!). He also recorded, with much feeling, how he found life during training in Canada, and subsequently at RAF Wickenby. It is an extraordinarily candid account of the true mental and stressful pressures that had to be endured by such dedicated operational aircrew - and a book I found difficult to put down until the last page had been read!

For nine decades, Beatson's words were lost too. But now, finally, his searing diary of life in the trenches is being published.