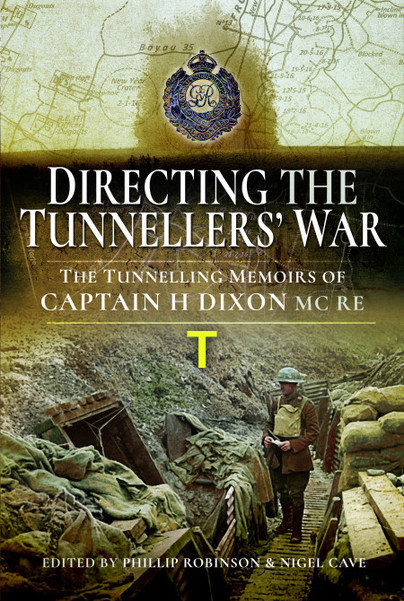 The Tunnelling Memoirs of Captain H Dixon MC RE

Click here for help on how to download our eBooks
Add to Basket
Add to Wishlist
You'll be £4.99 closer to your next £10.00 credit when you purchase Directing the Tunnellers’ War. What's this?
Need a currency converter? Check XE.com for live rates

The original version of this memoir was entitled The Lighter Side of a Tunneller’s Life; he has hoped to get it published in the late thirties, but this was a period when many publishers considered that there was ‘memoir fatigue’ as regards the Great War – and a new war was looming.

With a background in mining and tunneling (the internal evidence suggests that some of this was done in South Africa), he served with a Tunnelling Company and was then transferred to GHQ in Montreuil to handle mining plans and records. The British organized their mining at Army and GHQ level, with a close control on operational activity being reserved to GHQ. In due course he was appointed as one of the Assistant Inspectors of Mines, a small group of Royal engineers’ officers who operated as the eyes and ears of the Inspector of Mines, who exercised overall control on mining operations. His activity in this role is particularly important for the period after the June 1917 Messines Offensive, when the use of mining for blows against the enemy substantially diminished – indeed, all but disappeared – and the tunneling companies were reallocated to a new range of tasks.

His manuscript, produced in 1933, was intended for publication, but remained no more than a draft, rescued some time ago by one of the editors from the Royal Engineers’ archives at Chatham.

Dixon remarks that the carnage and horrors of war have been deliberately omitted, for enough and to spare has been written about these aspects by countless others. His manuscript, alternatively, provides a valuable insight into the overall conduct of mining operations and the tactical and strategic considerations that rarely feature in other accounts.

He was at the centre of staff activity that set about countering the effects of the German Kaiserslacht offensives in March, April and May 1918, and the preparations for a possible German breakthrough to the channel ports. Subsequently, with the allied advances of the ‘Last Hundred Days’, he became considerably occupied by the hazards of dealing with delayed action mines and booby traps.

Aside from these tactical and strategic considerations, he recounts, by means of numerous humorous anecdotes, the personalities and work of the staff at GHQ, ranging from humble clerks and the misdemeanors of his batman to senior officers. He brings to life the exceptional endeavours of the often maligned senior staff and the individual characteristics of many senior staff officers who are otherwise but shadows in accounts of the Great War.

The editors have added extensive notes explaining and, on occasions correcting, Dixon’s accounts; these are illustrated with explanatory plans and diagrams along with photographs of many of the personalities he describes. The combination provides a very personal perspective of the conduct of the war at GHQ.


This book is an essential one to have to understand the various aspects of the Tunnelling war.

Captain Herbert Dixon wrote his memoirs in the 1930’s but his manuscript lay undisturbed in the archives of the Royal Engineers until discovered by retired Sapper, Colonel Phillip Robinson. He and Nigel Cave are long standing members of the Durand Group, who have been exploring, rendering safe and charting the extensive network of tunnels on the Western Front for almost thirty years. Both are well known Great War historians and Phillip has an unrivalled passion for and knowledge of tunnelling and mining operations. Much has already been published on the subject, notably the well known early official history “Tunnellers” by Captain W Grant Grieve which was published in 1936, but many of the War Diaries for individual units are sparse and therefore personal accounts are invaluable when studying tunnelling operations generally and the activities of specific tunnelling companies. From early 1916 Herbert Dixon served underground with 255 Tunnelling Company RE until the end of the year when he was transferred to GHQ in Montreuil. At GHQ he initially had responsibility for the planning and conduct of tunnelling and mining operations under the Inspector of Mines and latterly on promotion to Captain he was tasked with visiting tunnelling units at the Front, including those committed to the spectacular mining operations at Messines and Vimy Ridge, and reporting back to GHQ. Herbert Dixon writes clearly and graphically of his experience of tunnelling operations at all levels from the highly dangerous subterranean work of the tunnelling companies to the frustrations of working with the General Staff at GHQ. The editors are to be congratulated on the way in which they have skilfully blended Dixon’s original narrative with notes of context, explanatory and, where appropriate, technical details, biographical notes and a wealth of photographs, diagrams, sketch maps and plans. The eight detailed Appendices include much additional detail including an analysis of fatalities in Tunnelling Companies during the War drawn from the Tunnellers Old Comrades Register which makes sobering reading. The editors have done brilliantly in enhancing the narrative so well without in any way losing the freshness of the original memoirs. Most highly recommended.

Overall, this book offers ideas for the model maker but will need following up with other research if it is to be the basis of a model. For the historian of the Great War, it is more readable than most memoirs and it covers topics that are little covered elsewhere. For the wargamer or specialist historian who wants to research the work of the engineers, it covers a lot of invaluable information, much of it unavailable elsewhere.