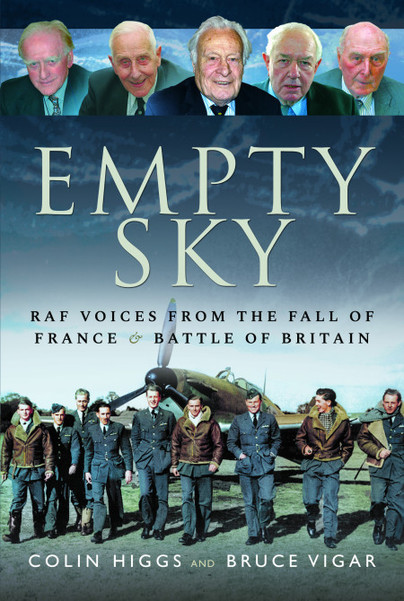 RAF Voices from the Fall of France and Battle of Britain

Add to Basket
Add to Wishlist
You'll be £21.00 closer to your next £10.00 credit when you purchase Empty Sky. What's this?
+£4.50 UK Delivery or free UK delivery if order is over £35
(click here for international delivery rates)

One moment the sky would be full of aircraft wheeling and positioning for the best shot at the enemy; a sky full of danger and menace. The next instant there would just be a clear blue empty sky with the sun shining down on a calm and beautiful landscape. Such was the phenomenon experienced by pilots who fought in the key battles of France and Britain in the Summer of 1940.

These air battles were certainly the most important ever fought in defence of the country and have deserved the millions of words that have been written about them. However, as the number of surviving veterans dwindles to single figures, interviews with some of ‘The Few’ who actually fought the battle are of increasing importance and rarity.

The sixteen stories are riveting and insightful, yet full of modesty and humour. The veterans talk about not being very good or just being followers of the aces – but underneath it all is a great pride that day after day they flew sortie after sortie against an enemy who had never been beaten until that moment. They talk of aerial battles perhaps three or four times each day; of the aircraft that carried them into battle without faltering; of the social life in their precious moments of quiet and peace; but most of all they talk about comradeship, friends and colleagues. Some friendships lasted barely a few days while others continued for decades.

Three of the interviewees epitomise the men from fifteen other countries who joined the RAF to fight. Others represent the thousands of ground crew, WAAFs, ATA, drivers, plotters, radar operators, airfield defenders, controllers, aircraft builders, cooks and associated personnel without whom the Royal Air Force would have been unable to maintain the fight against Germany.

“Empty Sky” is a visceral, and turbulent re-telling of the battles of France and Britain, and it succeeds in removing the superhuman veneer foisted upon the respondents by generations of re-telling, and recasting them as something we can all relate to: ordinary persons living in extraordinary times, being pushed beyond their mental; emotional, and physical limits, with all of the subsequent frailties that exposes. In sum, “Empty Sky” represents one of the last opportunities to emotionally connect with the remaining ‘Few’ as fellow humans without official parenthesis or sanitisation and is highly recommended as a result.

The Battle of France came as a shock to the British and everyone else due to the speed in which German forces advanced to the French coast. Then the wait for Germany to attack the UK started until the German Air Force made its move and the Battle of Britain began. During this period the men and women of the Royal Air Force was all that stood between the UK and defeat; it is books like this that enable us today to have an understanding of the lives these people lived at that time.

The authors of Empty Sky have achieved two things. They have produced an excellent read for anyone interested in the events of 1940 and they have recorded in one place many of the memories of the last of those who were there.

I’ve been saving this book for close to Remembrance Day on the 11th, mainly because I find this day important as I run a youth group called Fishguard Navigators, part of a national organisation. I believe remembering these great men and women is important and something we need to all do young and all. Empty Sky looks at a number of men and one woman who served in the RAF during the Battle of Britain. We read about the brave young men who flew sorties, dogfights, camaraderie and rather than becoming a team, becoming a family of pilots. A few of these men in this book are no longer with us sadly, but this book of a series of interviews tells the beautiful of young men and women fighting against a common enemy.

I have in the past year or certainly the last few months read a number of books that look at the men involved in the Battle of Britain, a vitally important event in British history. Where do I see this book? Well in my opinion this is one of the better books I have read on this particular subject, now it’s similar to some of the others in that it retelling of interviews with a group of decent, brave men. Some of the people in the book I had heard of before, but they are all great stories. A really good read and one I enjoyed a lot but then I would find it strange if you didn’t. Certainly all these books should be written to capture a moment in time involving some really important people who participated in an important event. An excellent 5 star rating.

As we move swiftly towards an unusual Remembrance Sunday, the number of men and women who experienced and took part in the Battle of Britain become fewer and fewer. Higgs and Vigar's collection of memories and anecdotes from men and women who were there is an invaluable source of actual history and at the same time a rare opportunity to share in those memories, which make this year's "celebration" all the more poignant.

It only seems like yesterday that Max Arthur and Richard Van Emden were hurrying out books to commemorate the last of the First World War veterans as they slowly faded away. Now it's the turn of authors like Colin Higgs and Bruce Vigar who have compiled a little cracker based on interviews with 16 men and women who served with the RAF during the Second World War.

Make no mistake though, this is not a book that has been rushed into print. The first of these veteran interviews dates back to 1998 and some of these men, remembered now, have already been dead for many years. Be that as it may, these men and one woman live on through their memories.