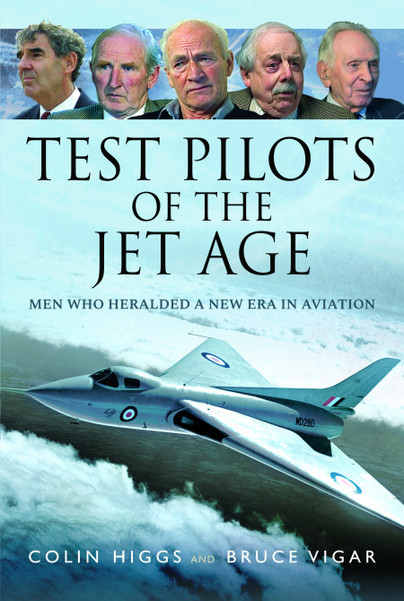 Men Who Heralded a New Era in Aviation

Add to Basket
Add to Wishlist
You'll be £19.99 closer to your next £10.00 credit when you purchase Test Pilots of the Jet Age. What's this?
+£4.50 UK Delivery or free UK delivery if order is over £35
(click here for international delivery rates)

Today, as we board our flights to Adelaide, Zurich, and all points in between, we give little thought to the jet power that will take us there. But, this is only possible because just over 70 years ago a select band of British test pilots was prepared to risk all in the quest to fly further, faster and higher than ever before. Their quest was fraught with danger; disaster and death were never far away.

This book captures eleven of those stories as told by the pilots themselves – their words as to how they took British aviation to the forefront of a new era, the ‘Jet Age’. Britain’s aircraft industry was booming in the years immediately after the end of the Second World War and the demand for test pilots seemingly limitless as new aircraft types rolled off the drawing boards. Meteors, Vampires, Hunters, Comets, Victors, Vulcans and Harriers were some of the aircraft that became world-beaters. Today, these names and the role played by the test pilots in bringing these projects to fruition are all but forgotten.

The stories were filmed over a number of years and it is the edited transcripts of those interviews that form a unique and rare perspective on such a pivotal era in aviation. Most were veterans of the Second World War with illustrious service records. Now they faced new battles as they flew new airframes and engines to the limit and sometimes beyond. First, they had to conquer the ‘sound barrier’ which to many, scientists and the public alike, had assumed almost mythic status. Having done that, they were soon flying at twice the speed of sound, such was the rate of progress. It took discipline, technical know-how, an above average level of flying skill and according to some, a lack of imagination to make a good test pilot. Their stories are often insightful, always modest and often tinged with humour.

"Well worth the money!".

A really enjoyable book covering the early post war years of test pilots, detailing both the pilots and the aircraft types. Interesting facts made about the test flying including the handling and quirks of some of the experimental aircraft being tested.
I recommend this book to anyone who has an interest in flying, as its a riveting read.

A vital read for aviation enthusiasts. The book covers a number of famous and not-so-famous British test pilots at the dawn of the jet age. The well-known names include Peter Twiss. John Cunningham and Eric 'Winkle' Brown. The latter pilot being extraordinarily talented and holds, to this day, the world record for flying the most aircraft types (487). This record is unlikely ever to be broken.
The author eloquently writes about the dangerous technical transition from propeller-driven aircraft into the jet era. Many pilots were killed while testing new aircraft types - unfortunately discovering the unexpected, uncontrollable, aerodynamic characteristics of the designs.
I had the honour to meet John Farley, the Harrier test pilot. A fun & unassuming character and an excellent raconteur.
I really enjoyed reading the narrative sections from the pilots and was impressed with the respect that they all had for the design engineers.
The loss of the British aviation industry is a national tragedy.

A interesting collection of short biographies about a lot of unknown pioneers of the jet age in Britain.