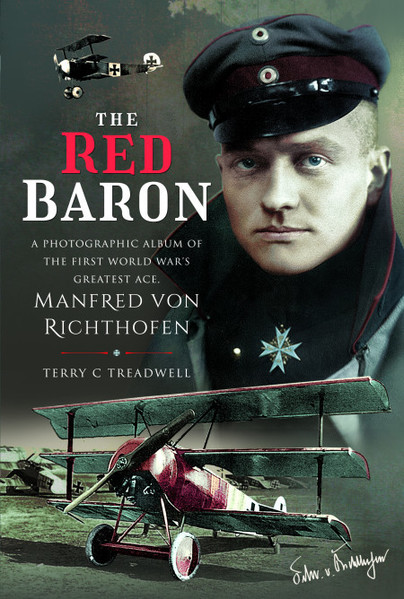 Add to Basket
Add to Wishlist
You'll be £19.99 closer to your next £10.00 credit when you purchase The Red Baron. What's this?
+£4.50 UK Delivery or free UK delivery if order is over £35
(click here for international delivery rates)

"If, like me, you don’t yet own a book dedicated to the Red Baron this one is well recommended."

"...this book makes it easy for someone just learning of his exploits to get a pretty good overview of the man and the pilot in one place."

I did not know what to expect from this book it looked like an interesting subject but had no idea that it would be this good! It is a tremendous insight into what happened a couple of hundred feet or so above the solemn trenches over Belgium and France. Some parts of the book provoked real emotions about those early pilots in battle like the accident whilst in combat that ended the life of Captain Boelcke to the injuries, to the Red Barrons own injuries. There was a real comradery in the skies with a fair amount of mutual respect between both sets of pilots from both sides true respect, that lead to the dropping of a note by a lone British pilot with a note that I felt choked while reading it.

I know World War 1 was a horrific experience for all who took part in it but some things that happened or took place during it was pure humanity, coming together of the soldiers for a football match at Christmas, to helping each other when animals got caught up in barbed wire. It still showed that no matter who you are or what side you are fighting for all men seemed to find compassion during some of the terrible fighting.

Collects a large number of photographs in to one affordable volume.

The book contains many pictures, tightly grouped around Richthofen himself, thereby offering an almost intimate portrait of the Red Baron in that you get the sense of the man as a warrior and leader. In the most poignant photograph, however, you do not see Richthofen, just him flying his triplane into the distance on his last mission. For those interested in the air war in WWI, this is an informative biopic of the greatest pilot to fly in it and an enjoyable evening’s reading.

Probably the most well-known military man from the 1914-18 war. This biopic is one of the best I've seen, and there are quite a few now.

The Red Baron stands out with probably only a few others from the First World War, an intriguing fella who accomplished a lot from his trade. Anyone who is a fan of early aviation and pilots would love this book, along with a great number of photos this is an excellent read. The book is very well written and split up into little manageable chunks of info and data, if anything their feels like there is an aver abundance of photos. There is a great spreadsheet at the back of the book that lists all his kills and achievements. Unfortunately, I don’t think we’re ever going to find out the real truth of how he died, but the book really does make a good go at selling the story of the Red Baron, and it’s been a really good ‘hero’ type read.

Of all the personalities that came to fame in WW1, perhaps it is the Red Baron who is the most well known. I remember being at an airshow a few years ago where a Luftwaffe RF-4E Phantom display aircraft had the callsign of 'Red Baron' on the day. An interesting photo collection that should be invaluable to anyone wishing to know more about the life of Manfred von Richthofen.

This is a must for anyone interested in The Red Baron and aerial combat of World War 1. There will be plenty of new photos that will not have seen before, I am sure. It is a very interesting topic and the book worth revisiting.

This was an engaging and brief look at the prowess of the Red Baron. Filled with sepia pictures of him enjoying the company of his dog, family, friends, and fellow pilots. A must read for any Red Baron fan. The main sections cover a bit about his flight training and how he managed to qualify as a pilot, a chronological look at his last dogfight, and an analysis of the post mortem reports and who may have made the kill.

The dogfighter and his beloved dog: How the Red Baron who brought terror to the skies and downed 80 Allied pilots in WWI... knew his loyal Great Dane Moritz would always be waiting for him to land

In aviation’s pioneering days the best and bravest airmen pushed the boundaries of flight in all dimensions and attitudes. When aeroplanes went to war this exploratory art, now known as aerobatics, was called ‘stunting’ in breezy RFC slang. Initially forbidden as foolhardy, its importance for survival soon became paramount in the life and death mêlées of dogfighting. But pilots still delighted in the joy and exuberance of aerobatting for its own sake, and they recognized a master of that very special skill in young D’Urban Victor Armstrong, whose displays were nothing short of electrifying.…