Add to Basket
Add to Wishlist
You'll be £25.00 closer to your next £10.00 credit when you purchase Lawmen of the Wild West. What's this?
+£4.50 UK Delivery or free UK delivery if order is over £35
(click here for international delivery rates)

This book delves into the history of the Wild West. It explains how the stereotype of the local sheriff we see in every book and movie came to be. It was so fascinating. It almost read like fiction, it was so well written.

Treadwell is a story-teller, and he links many of his tales to weave a thread through them, though the over-arching narrative is not quite there. Fans of the Wild West will enjoy this collection, which matches well with his similar styled book on outlaws, while more serious students will find many of the incidental aspects, particularly on race and ethnicity, thought-provoking.

A great historical read on some of the more notable Peace officers in the west, stories new and well known to most with proper corrections to the fables we have seen in movies. If your a fan of the old west or the various lawmen of the day this will be right up your alley, the stories are captivating and well written the book keeps you wanting to read father and farther as you get into each story. I would highly recommend buying a copy i will be purchasing one for myself..

Like I said previously when I reviewed Outlaws of the Wild West, this is the subject that I adore reading about. Again this book is very well written by Terry C. Treadwell, he certainly knows his stuff and this book is comprehensive and very easy to read. If you’re going to have outlaws in the American West, then you’re going to need Lawmen in the American West to keep them in some sort of order. As in the first book the book is split up into chapters with each chapter looking at an individual Lawman, the book covers such notables as Frank Dalton, Wyatt Earp and Pat Garrett along with some lesser-known names. A fantastic book that covers each lawman from being a youngster to old age or death in some cases. I obviously enjoyed this book highly, I would also like to see similar books looking at Indians, Civil War Generals or American West Pioneers. A definite 5 stars from me. 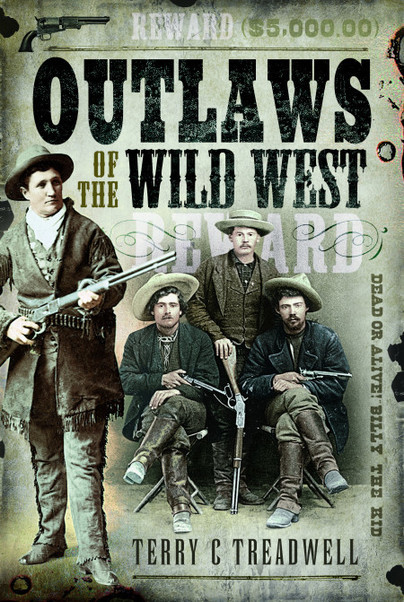 Click here to buy both titles for £50.00
More titles by Terry C Treadwell