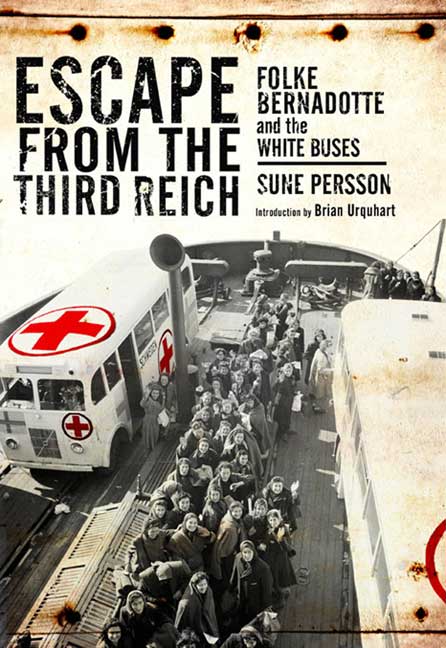 Escape from the Third Reich (ePub)

Click here for help on how to download our eBooks
Add to Basket
Add to Wishlist
You'll be £4.99 closer to your next £10.00 credit when you purchase Escape from the Third Reich. What's this?
Need a currency converter? Check XE.com for live rates

The Swedish Red Cross expedition to the German concentration camps in March–April 1945 was the largest rescue effort inside Germany during WWII. Sponsored by the Swedish Government and led by Count Bernadotte of Wisborg, the mission became known for its distinctive buses. Each bus was purposefully painted entirely white except for the Red Cross emblem on the side so that they would not be mistaken for military targets.
Due to the chaotic conditions during the last weeks of the war, it is impossible to say exactly how many prisoners were liberated by the expedition, but according to conservative figures by 4 May 1945 at least 17,000 prisoners had been transported to Sweden by the so-called 'White Buses'. Of these, some 8,000 were Danes and Norwegians, around 6,000 were Poles and more than 2,000 were French citizens.
This is the first book to tell the full story of this remarkable and hazardous operation. It also details Bernadotte's harrowing expedition to Ravensbrück concentration camp and his extraordinary negotiations with Heinrich Himmler the Reichsführer-SS who was in charge of the German concentration camps. During the course of these discussions Himmler also made an offer of German surrender – an offer that was rejected by the Allies – but remains one of the most interesting episodes of the war.
This is a first first English edition of a Swedish-language work, with new material from the PRO and photographs of the bus journeys which have never been published. anywhere before.