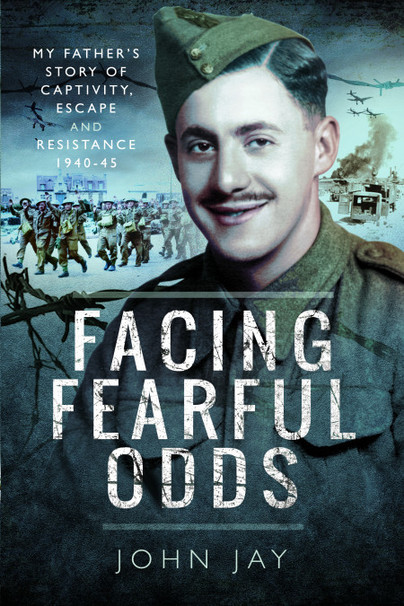 My Father's Extraordinary Experiences of Captivity, Escape and Resistance 1940–1945

As seen in the Metro, read the article online: 'One for all and all for one'

As seen in the Mail Online: 'Bravery of British PoWs who made human shield around Jewish soldier'

As seen in the Daily Mirror, read the article online: 'British PoWs formed human shield around Jewish soldier to stop him being taken by Nazis'

You'll be £14.99 closer to your next £10.00 credit when you purchase Facing Fearful Odds. What's this?
+£4.50 UK Delivery or free UK delivery if order is over £35
(click here for international delivery rates)

On 22 May 1940 Alec Jay arrived in Calais with his Battalion, the Queen Victoria Rifles. After four days of intense fighting, he was taken prisoner of war along with those of his colleagues who were not killed. The Calais Garrison was not evacuated. His situation as a POW was exceptionally perilous as he was a Jew. Made to wear distinctive clothing, he was all too aware of the Nazis determination to eradicate his race. Undeterred he made five escape attempts as well as leading a successful protest strike, one of the few during the War.

When he finally escaped, he teamed up with Czech partisans and fought alongside them during the closing stages of the War.

John Jay, a distinguished journalist and financier, has reconstructed his father's war using the archive material from four countries and numerous other sources and POW accounts. The result is a fascinating and inspiring story.

Article: 'How the comrades of a Jewish-British POW saved him from their Nazi captors' as featured online by