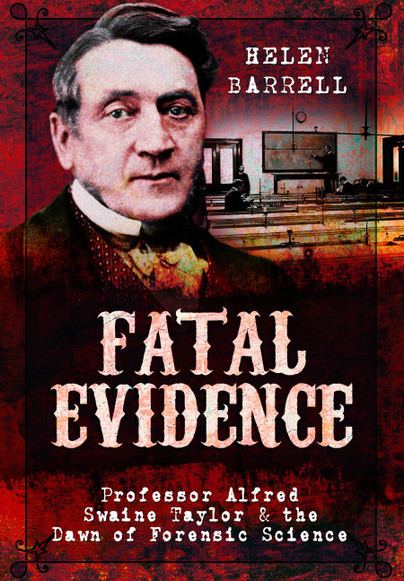 You'll be £19.99 closer to your next £10.00 credit when you purchase Fatal Evidence. What's this?
+£4.50 UK Delivery or free UK delivery if order is over £35
(click here for international delivery rates)

If there was a suspected poisoning in Victorian Britain, Professor Alfred Swaine Taylor was one of the toxicologists whose opinion would be sought. A surgeon and chemist at Guy’s Hospital in London, he used new techniques to search human remains for evidence that had previously been unseen. As well as finding telltale crystals of poison in test tubes, he could identify blood on clothing and weapons, and he used hair and fibre analysis to catch killers.

Taylor is perhaps best remembered as an expert witness at one of Victorian England’s most infamous trials – that of William Palmer, ‘The Rugeley Poisoner’. The case of the strychnine that wasn’t there haunted Taylor, setting up controversial rivalries with other scientists that would last decades. It overshadowed his involvement in hundreds of other intriguing cases, such as The Waterloo Bridge Mystery; The Great Fire of Newcastle and Gateshead; and the investigation into female impersonators, Boulton and Park. Crime struck even at the heart of Taylor’s own family, when his nephew’s death became the focus of The Eastbourne Manslaughter.

Taylor wrote many books and articles on forensic medicine; he became required reading for all nineteenth-century medical students. He gave Charles Dickens a tour of his laboratory, and Wilkie Collins owned copies of his books on poisons. Taylor’s work was known to Sir Arthur Conan Doyle, and he inspired the creation of fictional forensic detective Dr Thorndyke; for Dorothy L. Sayers, Taylor’s books were ‘the back doors to death’.

From crime scene to laboratory to courtroom – and sometimes to the gallows – this is the world of Alfred Swaine Taylor and his fatal evidence.

An engrossing read!
Helen Barrell’s Fatal Evidence: Professor Alfred Swaine Taylor and the Dawn of Forensic Science is an engrossing read. It follows the career of Taylor, a remarkable scientist who gave evidence at the trial of William Palmer, “The Rugeley Poisoner”, pioneered the study of forensic medicine and let Charles Dickens nose around his laboratory. Barrell explores Taylor’s (occasionally bizarre) cases, his public and private persona and his wide-ranging interests, which included geology and photography. Her description of the ways in which forensic experiments evolved is as fascinating as the courtroom dramas they accompanied.

Taylor’s eventful life is organised chronologically. Barrell provides us with excellent notes, illustrations, a timeline and a detailed index (ideal for the researcher interested in his legal appearances). Fatal Evidence is a must read for any lover of crime writing, criminology and Victorian cultural history.

This well researched book is presented as a factual historical work with 32 black and white plates grouped together in the centre, and at the back a handy timeline, a bibliography of relevant texts including a comprehensive list of Taylor’s publications, and a section headed ‘Notes’, which constitutes a very thorough and extensive reference list not annotated within the main text, presumably to promote reading flow.

Fatal Evidence should appeal to the interested lay person who is not deterred by entrails in various states of decomposition, and would be of use to a historian – medical or otherwise – as an introduction to either Taylor or forensic science.

Read it for: A detailed account of one man who pushed medical and forensic science forward

It’s a fascinating read and, if you read one non-fiction book this year, Fatal Evidence should be it.

A great book, of interest to anybody fascinated by crime detecting and its history, to readers of the history of the period, and to writers (and readers) who love crime historical fiction. A fascinating historical figure and a well-researched and engaging book that gives him some the credit he deserves.

This is an interesting read and a look into early forensics.

Set in Victorian England Professor Alfred Swaine Taylor's story takes us on a journey that covers some of his various cases.

It is a fascinating look into the world of criminology and the solving of murders that were hideous and gruesome as well as looking at some of the famous faces he came into contact with.

Covering the breadth of Taylor's interests - from crime to public health, and geology to photography - and with research into his family history and home life, Helen uncovers the private man behind the public persona, using her well-honed genealogical skills to bring his Victorian world thrillingly to life.

Author article on Suffolk ancestry as featured in

"Totally fascinating account of the life and career of Alfred Swaine Taylor, the father of modern forensic science. Refers to many famous and not so famous cases, as well as giving an insight into this clever, enthusiastic, honourable and dedicated man. Very clearly written and very enjoyable read."

Helen Barrell’s biography of Alfred Swaine Taylor comprehensively covers the life and work of this early advocate of forensic science and public health. I found this biography engrossing, and easy to read, with plenty of illustrations and a comprehensive bibliography. Which makes me very happy.


There have been no previous biographies of this person, so Ms Barrell had her work cut out in researching the long and full life of this gentleman. I was impressed by the quality of the research and the very readable way the facts were presented.

The book is chronological, and after covering childhood and parentage, moves through Taylor's life mentioning every significant published article and case in which he was involved. This must have involved a lot of reading of old newspapers.

The result is very interesting, as not only does it tell Taylor's story, but it inadvertently gives a timeline of the use of medical evidence in criminal trials during 1830-1880. It becomes fascinating to watch the changes in reception to the scientific facts of poisoning, from the beginnings, when often the Judge would treat Taylor's information with disdain and dismiss it, to the almost reverential respect he achieved in court be the end.

Taylor's other interests, early photography, and an obsession for public health are all covered in the text, with short backgrounds placing each situation in context. He campaigned for correct payment of medical witnesses, for the regulation of poisons, and for the expert witness to become impartial, without the obligation to twist their testimony to the defence or prosecution.

The final section, which covers mentions of the author in crime literature is a fascinating and very welcome addition.

I read this book rapidly, the wealth of information regarding the development of forensic science as used in court case during the Victorian period was amazing and riveting.

I would heartily recommend this book.