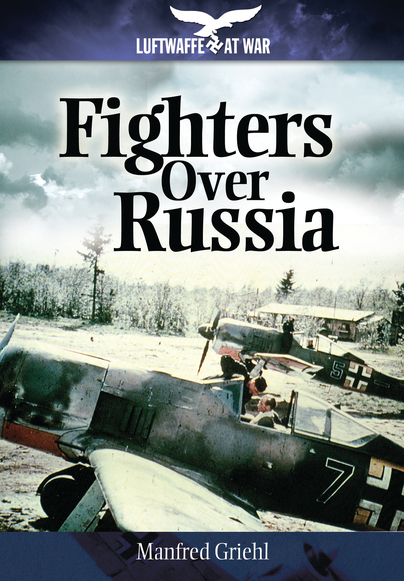 Add to Basket
Add to Wishlist
You'll be £12.99 closer to your next £10.00 credit when you purchase Fighters Over Russia. What's this?
+£4.50 UK Delivery or free UK delivery if order is over £35
(click here for international delivery rates)

Order within the next 9 hours, 49 minutes to get your order processed the next working day!

Initial success in Russia during the summer of 1941 gave way to desperate days after Stalingrad and the failure of Germany's last major offensive in 1943. Subsequently the Luftwaffe was stripped of its newest fighters for the defense of the Reich and lost air superiority to the Red Air Force.

This new addition to the outstanding Luftwaffe at War series examines the crucial air campaign over the Eastern Front through 120 specially selected and informatively captioned photographs. Unusual scenes include bombed-out Russian aircraft abandoned during the initial German advance and the use of horses and oxen to haul supplies and even aircraft, as fuel became scarce toward the end of the war. Several pictures of aircraft operated by the Germans' Romanian allies add further insights into the Luftwaffe in the East.

'Well into the series Luftwaffe At War, I find each additional volume more intriguing, this current text by Manfred Griehl however is the pinnacle of these Luftwaffe studies. The material covers a great amount of fact and detail and is constant in the superb photographic development of the topic. This book serves a multitude of roles; first as a stand alone study of the German Air Force in the Russian Campaign. Secondly as an incredible lead in text for the larger Pen and Sword Eastern Front series; Images of War books on the Russian Invasion. And lastly as a new source of academic and scholarly gold developing period fact and foundation.'

Another of the Luftwaffe at War series of photo books re-printed by Pen and Sword. This one was previously published back in 1997 by Greenhill Books. It opens with 4 pages of background text which outline the story of the Luftwaffe on the Eastern Front. That story is then told with an excellent selection of archive photos, all with some well written and informative captions.

The first batch of photos are a number of original colour images, 8 pages mostly covering Me Bf 109 variants, a couple with Fw 190's and some ground crew as well. The rest are all black and white, which fill the remainder of the 72 pages. There are a mix of the various types of both Me Bf 109 and Fw 190 throughout, with a sprinkling of other subjects as well. These include a number of captured Soviet aircraft, as large numbers were captured in the opening period of the war on the Russian Front. Many of them were not modern enough to be effective to be reused by the Luftwaffe but there are some pictures in here which could make the basis of some interesting dioramas. The other thing that is included are the ground crews, maintenance work and what are clearly wide open expanses of countryside where aircraft were based and had to be serviced in the open. There are some airfield hangers but the conditions from the heat of summer to the bitter cold of winter is well illustrated when out in the open.

Among the variety of situations shown in the pictures, my favourite shows a combination of an Einheits Diesel truck towing a low loader trailer which carries the main wings, while hitched up behind that is the fuselage of the Me Bf 109 they are recovering and being towed on it's undercarriage.

This is a very good series of photo books and it is very handy that they are now being re-printed.