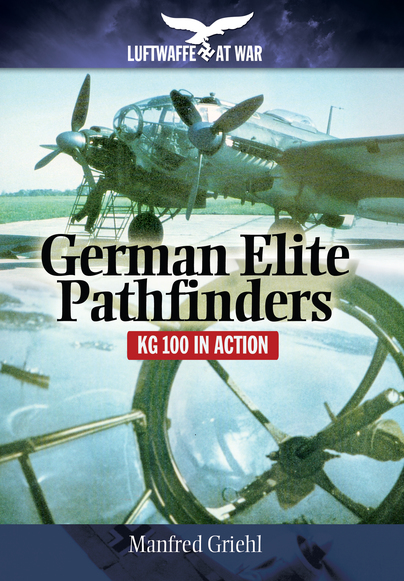 Add to Basket
Add to Wishlist
You'll be £12.99 closer to your next £10.00 credit when you purchase German Elite Pathfinders. What's this?
+£4.50 UK Delivery or free UK delivery if order is over £35
(click here for international delivery rates)

Flying as an elite element of the Luftwaffe's bomber forces, KG 100 (Wiking) saw action throughout Europe and flew mission after mission against targets as diverse as the Suez Canal and Moscow.

Equipped with x-ray navigational systems, KG 100 flew as pathfinders, leading bomber streams against targets on mainland Britain. In 1940 the unit took part in the Norwegian campaign and, a year later, was involved in the bombing of Moscow. Operations continued in the west with anti-shipping operations and in the east with operations in the Crimea and in support of besieged Germans in Stalingrad.

Whether bombing or pathfinding, KG 100 excelled at dangerous missions in all kinds of conditions and its reputation was such that it was the first unit to fly air-to-surface guided missile attacks against Allied shipping.

The author of this volume has written a four-page account of KG 100’s activities throughout the Second World War. This section is clear and concise and details the combats that KG 100 participated in, the various locations where it was stationed and the operations it undertook. The notes are well researched and are an adjunct to the photographs which compose the majority of the work. The photographs themselves are unique and are a mixture of both colour and monochrome images. The eight pages of colour photographs will be of high value to aviation historians and those with specific interests in WWII Luftwaffe aircraft and their colour schemes. The remaining 51 pages of monochromatic images are largely taken ‘in theatre’. They will also be of interest to both enthusiasts and historians.

This volume is of the ‘aviation monograph’ genre and is essentially a ‘picture book’ of photographs, accompanied by a small amount of text. For those interested in aircraft markings, colour schemes or unit histories, these images form the most important part of such works. As an example of the genre, this work meets these criteria well.