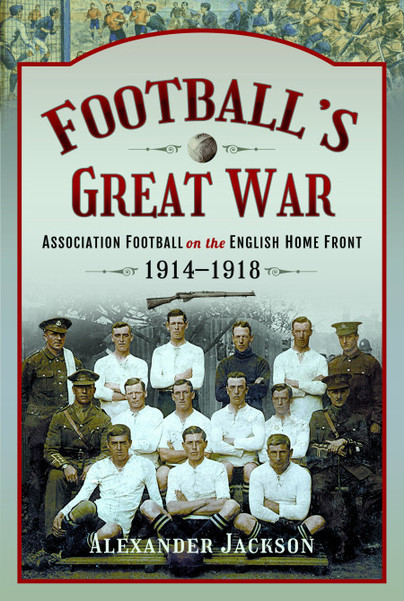 Click here for help on how to download our eBooks
Add to Basket
Add to Wishlist
You'll be £9.98 closer to your next £10.00 credit when you purchase Football's Great War. What's this?
Need a currency converter? Check XE.com for live rates

As modern football grapples with the implications of a global crisis, this book looks at the first in the game’s history: The First World War. The game’s structure and fabric faced existential challenges as fundamental questions were asked about its place and value in English society. This study explores how conflict reshaped the People’s Game on the English Home Front.

The wartime seasons saw football's entire commercial model challenged and questioned. In 1915, the FA banned the payment of players, reopening a decades-old dispute between the game's early amateur values and its modern links to the world of capital and lucrative entertainment.

Wartime football forced supporters to consider whether the game should continue, and if so, in what form? Using an array of previously unused sources and images, this book explores how players, administrators and fans grappled with these questions as daily life was continually reshaped by the demands of total war. From grassroots to elite football, players to spectators, gambling to charity work, this study examines the social, economic and cultural impact of what became Football's Great War.

This book in my opinion is certainly an important one and asks the readers a number of questions about the role football plays in society, how much of a role does professionalism play in it and is there a big difference between keeping it in an amateur format or professional. The author of this book is also the Curator at the Football Museum in Manchester, and this certainly shows up well as he is able to draw on many sources and archive material in his writing for the book. I enjoyed the picture section within the book but then I am a football fan, it does seem though that having read a number of football books recently surprising how inept the FA really has been. I mean they almost ruined Women’s football and had it not been so big it’s lucky they didn’t kill off the men’s game or at least set it back a number of decades. A thoroughly good book and very enjoyable to read, highly recommended and I’m enjoying getting into the sporting history books.

As featured in: 'Author's book tells how football played on in First World War'

Article: 'Book about football during a world war'

Article: 'How the beautiful game played out during turmoil of Great War'

Great book.
Very emotional to read and remember those who fought who used football to help them.
Worth reading .

Dr Alexander Jackson is a Curator at the National Football Museum in Manchester and has researched and published widely on the history of English football. He was lead curator for the 2014 exhibition, The Greater Game: Football and the First World War. Born in Sheffield, he has inherited the family allegiance to Newcastle United.