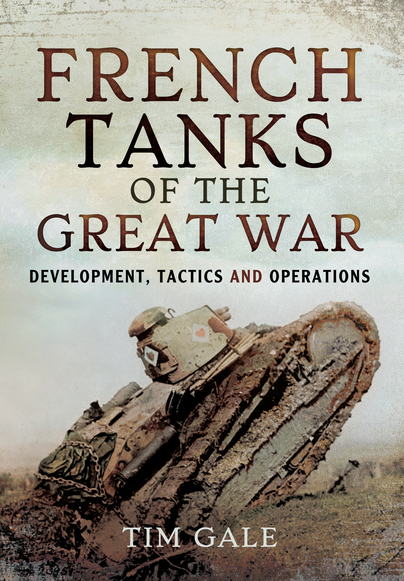 Click here for help on how to download our eBooks
Add to Basket
Add to Wishlist
You'll be £4.99 closer to your next £10.00 credit when you purchase French Tanks of the Great War. What's this?
Need a currency converter? Check XE.com for live rates

The French tank corps was an essential part of the French army from 1917 onwards, yet its history has been strangely neglected in English accounts of the Western Front – and that is why Tim Gale's meticulously researched history is such a timely addition to the literature on the First World War. Using information derived from the French military archives at Vincennes, he describes the design and development of the tanks, the political and organizational issues that arose between the French military and civilian bureaucracy and the record of these pioneering fighting vehicles in combat. All the major engagements in which French tanks participated are depicted in graphic detail, often quoting directly from recollections left by individual tank commanders of their experience in battle, and each operation is assessed in terms of its impact on French tactics in general and on tank tactics in particular. The story will be fascinating reading for anyone who is interested in the Great War, the French army, military innovation and the history of armoured warfare.

It is a wealth of information and I would definitely recommend it.

I found this a really interesting book to read, and it makes a good companion to anyone wishing to see how France learnt to use the tank at the same time as the British Army, and faced with the same kinds of problems. Lots of detail and a useful reference for those interested in the story of the tank. As well as the technical developments and operations of the machines, the need for senior commanders, along with both the fighting troops of the armour and infantry formations is nicely illustrated. Add to that the mix of artillery and air support, the need for all arms working together was clearly a lesson that needed learning in WW1.

While the British tanks of the Great War have been given a lot of exposure over the years (witness the excellent ‘War Machine’ episode of the BBC’s ‘Our World War’ series), French tanks have very much been neglected.

Yet, as this well-written and well-researched book show, they were an important part of the French army from 1917 onwards, so for that reason alone, this is a timely and important book.

Tim Gale has worked very hard on ‘French Tanks of the Great War’, accessing French military archives and much of the information contained herein has never been published in English before.

All the major battles French tanks took part in are related in great detail and in vivid fashion, giving the reader a strong sense of the action that has taken place and its consequences.

An important book on a hitherto neglected aspect of the Great War.

There is no doubt that it was the British who were the first to present a practical tank to the battlefield in 1916. However, it was the French who took the concept to the next level thanks to the revolutionary Renault FT-17, which was the first production tank to have it's main armament contained within a fully rotating turret; a system that remains in place to this day.

Tim Gale's book fills a gap in the history of the First World War which, up until now, has only been available in detail, in French language tomes.

Beginning with the formation of The 'Artillerie Special', the book takes us through the major battles involving French tanks, such as the Nivelle Offensive, Battle of Malmaison, Matz and Soissons up to the Armistice.

Gale's book maybe text heavy, with only 16 black and white plates, a few pages of diagrams and plans to break it up but this does not detract from the fact that it is very easy to dip into... highly recommend to all early tank fans.

Really great and thorough documentation work in the service of the reader.

Dr Tim Gale was awarded his PhD by the Department of War Studies, King's College London for his work on French tank development and operations in the First World War and he is now one of the leading experts on this aspect of armoured warfare. He has contributed chapters on the subject to several academic books and he has made a special study of the career of the French First World War general Charles Mangin. His book The French Army's Tank Force and the Development of Armoured Warfare in the Great War was published in 2013.