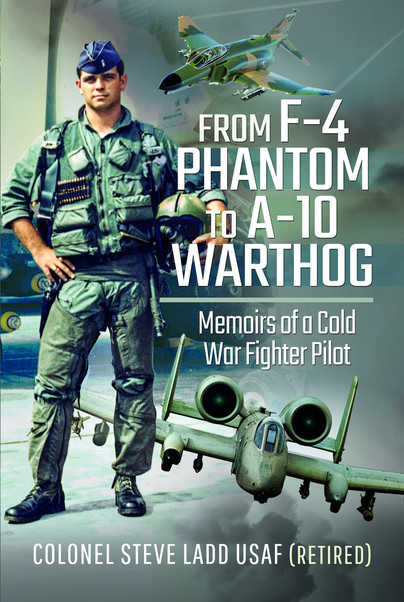 Signed copy available – request a signature plate at the checkout
Add to Basket
You'll be £20.00 closer to your next £10.00 credit when you purchase From F-4 Phantom to A-10 Warthog. What's this?
+£4.50 UK Delivery or free UK delivery if order is over £35
(click here for international delivery rates)

Fighter pilots! Images of Baron Manfred von Richthofen and Eddie Rickenbacker in the Great War, Johnnie Johnson, Robert Stanford Tuck and Richard Bong in the Second World War, or Robin Olds in Vietnam, all spring to mind. Volumes have been written about them, past and present. Understandably, most of these revolve around the skill, cunning and bravery that characterizes this distinctive band of brothers, but there are other dimensions to those who take to the skies to do battle that have not been given the emphasis they deserve – until now.

You do not have to be an aviation aficionado to enjoy Colonel Steve Ladd’s fascinating personal tale, woven around his 28-year career as a fighter pilot. This extremely engaging account follows a young man from basic pilot training to senior command through the narratives that define a unique ethos. From the United States to Southeast Asia; Europe to the Middle East; linking the amusing and tongue-in-cheek to the deadly serious and poignant, this is the lifelong journey of a fighter pilot.

The anecdotes provided are absorbing, providing an insight into life as an Air Force pilot, but, in this book, as Colonel Ladd stresses, the focus is not on fireworks or stirring tales of derring-do. Instead, this is an articulate and absorbing account of what life is really like among a rare breed of arrogant, cocky, boisterous and fun-loving young men who readily transform into steely professionals at the controls of a fighter aircraft.

Phantom to Warthog is a terrific read: the legacy of a fighter pilot.

Absolutely brilliant!!! As a retired USAF F4 Phantom and A-10 avionics technician the author (let's call him Steve) brought the humour and the trials and tribulations of USAF existence to life.

Steve leads us from being a student pilot (and USAF officer) through assignments in combat zones, Cold War bases and 'peace dividend' experiences, all the while weaving his story with humorous antadotes, seat of the pants flying and respect (kind of) for authority.

We get to meet Elaine, his wife/partner/spouse (you choose) and the positive influences (restraining voice) she had upon the author and his career.

Steve tells his story through his eyes with reflection of his progression through the ranks and jobs/functions he held during his career.

He had me in fits of giggles and/or fondly remembering my own experiences of the USAF life as we both knew it, and sadness it will never be that way again.

He was a combat flier, and was never happy behind a BGD (you have to read it!). This lends to Steve telling us of exploits and 'dream sheets' to avoid the BGD as much as possible. We in maintenance had similar constraints on career progression, so it was nice to see we all suffered under 'a common enemy'!

I could ramble on, but IMHO (read the book) he has done justice to his task as it says in the title, and the result is a most enjoyable read for both military and civilian audiences.

I would recommend it to one and all.

The author gives an insight into the precision and constant educational training required by his former profession, as well as showing the loyalty of colleagues and just good fun they had along the way. He describes the life in the USAF for him and his wife of nearly 50 yrs, Elaine. The couple have travelled the world, uprooting every three years or so, and their love, loyalty and support for each other shines through, as well as the love and respect for the good friends made along the way. It has technical detail, but framed in a way which is understandable to the uninitiated, and has anecdotal and funny stories which make it a good read for anyone who enjoys an adventure story with laughs. It is not just about aeroplanes, fabulous as it must be to fly them, but also the life lived along the way.

I have to say this is an extremely good reading, very engaging, very personal and comes highly recommended... I was absorbed from start to finish!

So, in conclusion I’ve decided it would be wrong to even try to categorise Steve Ladd’s memoirs. Rather I’d just like to summarise them. They are an insight into the life of someone who did a job I could never imagine doing, written by “one of the good guys” - a man of wit, compassion, courage, loyalty, sense of duty and patriotism that it would be lovely, but brave, to aspire to. Please do try and get hold of a copy of this book for yourself or anyone you know - reading it is a joyful education in so many ways.

Colonel STEVE LADD, DFC, MSc, BSc was a career USAF officer fighter pilot and commander for 28 years. During his career, he amassed over 4,400 hours’ flying time, equally split between the F-4 Phantom and the A-10 Warthog. His Phantom credential includes over 400 hours (204 missions) of combat experience over North and South Vietnam, Laos, and Cambodia. Since retirement from the USAF he has been employed as a CAA Aerodrome Inspector, Operations Director of Cardiff International Airport, Fast Jet Curriculum Development Lead for Ascent Flight Training, Ltd., and adjunct Professor of Aviation Science and Management at Embry-Riddle Aeronautical University.