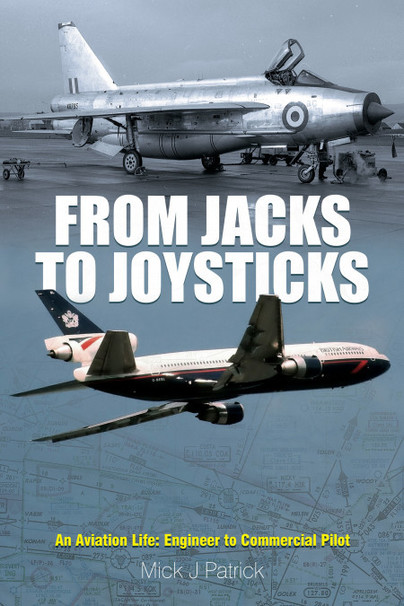 From Jacks to Joysticks (ePub)

Click here for help on how to download our eBooks
Add to Basket
Add to Wishlist
You'll be £4.99 closer to your next £10.00 credit when you purchase From Jacks to Joysticks. What's this?
Need a currency converter? Check XE.com for live rates

Trenchard Brat. Flying Spanner. Left Hand Seat. Nicknames abound in aviation. But not many get to be called them all, especially when they’ve started life with an aversion to school and a stammer thrown in. Mick Patrick started his aviation career as an RAF Apprentice and finished it as an Air Ambulance pilot. He never knew he was going to become a pilot – just that he was determined to have a good start in life and it seemed the RAF offered this to him.

As an engineer, Mick saw active service on jungle airstrips in the Far East during the Borneo Confrontation with Indonesia and got his hands dirty servicing Cold War aircraft. Later he had an opportunity to become aircrew as a Flight Engineer and it was from this position he was able to use his knowledge as part of a crew to take the next step. After many years of watching pilots ply their trade, Mick decided he could do it too, so worked his way up to becoming a commercial pilot.

Along the way he experienced risky moments that shaped him as an aviator; he crashed a float plane in a Texas lake, flew casualties to Coventry and elephants to the East, nose-dived in Nassau and skirted death at Stansted. The tales in this book are used to illustrate how they affected Mick’s approach to aviation and what he took away from those events.

Immensely readable and delivered by a true story teller, From Jacks to Joysticks is for anyone who loves tales of aircraft and life in aviation, whether in the cockpit or on the ground. Above all else this book is about how a lifetime of exposure to aviation has shaped one man’s thinking and approach to life and how in aviation you need to keep an open mind.

This is an easy read...Anyone with an interest in aviation and flying should find it enjoyable.

This is an engaging, inspiring and highly readable story, told with candour and a dry sense of humour.

It is a great read for someone with an interest and passion for aviation, one I would recommend!

Mick Patrick has always had a passion for aviation, both fixing it, and flying it. Having started in the RAF at Halton as an apprentice, he soon found himself on active service in Borneo, undertaking the frontline maintenance of military aircraft. On leaving the RAF, Mick qualified as a maintenance engineer on a number of the civil airliners of the 1970s, including various Boeings, the Canadair CL44, and the Britannia, among others. Mick started his career as a flight engineer on the CL44, flying for Transmeridian and Cyprus airways. Moving on to British Caledonian and British Airways, Mick gained experience on the DC10 and Boeing 707. In time, he gained his pilot’s wings on the Beech 200 King Air and began flying air ambulances. A further career ensued on the DC10 simulator as an instructor. Mick has also taught on such subjects as aviation security, the transportation of dangerous goods, and crew resource management. He is currently an IATA safety auditor. Mick has always been a keen private pilot and has owned two aircraft of his own.