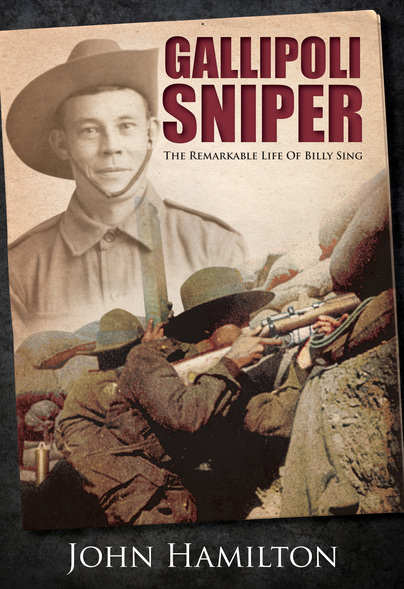 The Remarkable Life of Billy Sing

Click here for help on how to download our eBooks
Add to Basket
Add to Wishlist
You'll be £4.99 closer to your next £10.00 credit when you purchase Gallipoli Sniper. What's this?
Need a currency converter? Check XE.com for live rates

'This is a well-researched, detailed and compelling story.'
Defender Magazine

Billy Sing was a small, dark man – and a deadly killer. When, as a member of the Australian Imperial Force 5th Light Horse, he was thrust onto the narrow strip of land held by the Australians on Gallipoli, he witnessed the terrible effects of the Turkish snipers and decided to fight fire with fire. Using a simple Lee Enfield .303 rifle, Sing began to pick off unwary Turks who exposed themselves. Assisted by a 'spotter' who would single out targets for him, Sing acquired an unrivalled reputation as he killed increasing numbers of enemy soldiers.

He became known as the 'Anzac Angel of Death' and the 'Assassin of Gallipoli' and was considered to be the most successful sniper and most feared man in Gallipoli.
The Turks, aware of his reputation decided to target the Sing with their own marksman. In a deadly duel, Sing fired first and killed 'Abdul the Terrible'.

This a vivid account of the merciless nature of the fighting in the Gallipoli Campaign from an award-winning journalist and best-selling author.


The author provides a similarly well- researched history of the Australian Light Horse during the Gallipoli Campaign from which he draws out the centrepiece narrative of Billy Sing the 'Gallipoli Sniper'.
From the reader well versed in the history of Gallipoli I suspect that some of the campaign history may already be familiar. For myself i found it extremely interesting, well-written and absorbing to read, and it allowed me to place Billy's story within the general context of the experiences of the AIF troops

The author tells the story of Billy Sing in the third of his Gallipoli books. This compliments the author’s other Gallipoli titles. Highly Recommended.

The language is a little over-blown at times but one could argue that's right and proper when the subject matter is "The Assassin of Gallipoli". This is a book that will appeal to those with an interest in Gallipoli, sniping, and WW1 in general. Having recently read American Sniper, this account of similar activity 100 years earlier made for an interesting comparison.

Billy Sing's story has been well-researched, with multiple sources acknowledged. There is also a useful bibliography and index.

This is a fantastic story and a sad one, showing how men struggled to cope when the war was over. Like Hamilton's other Gallipoli titles, highly recommended and I hope the author will be writing some more books in the near future.

Gallipoli Sniper is a thoroughly absorbing publication... Rather than attempting to write about the whole operation, Hamilton has selected particular aspects of the fighting, which enables him to focus in detail upon his chosen subject. The result is a fascinating book.