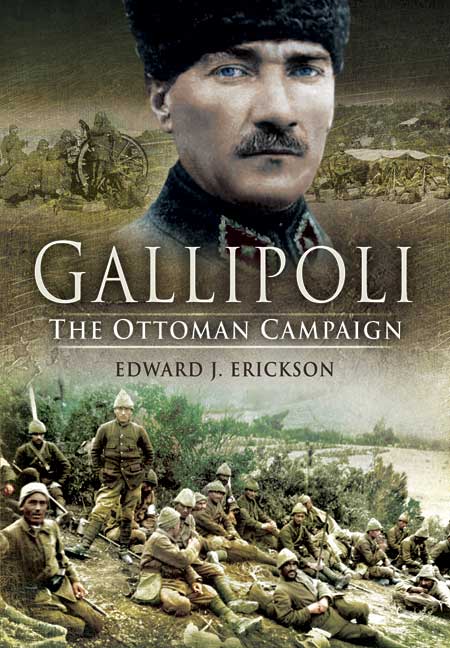 Click here for help on how to download our eBooks
Add to Basket
Add to Wishlist
You'll be £4.99 closer to your next £10.00 credit when you purchase Gallipoli: The Ottoman Campaign. What's this?
Need a currency converter? Check XE.com for live rates

The Ottoman Army won a historic victory over the Allied forces at Gallipoli in 1915. This was one of the most decisive and clear-cut campaigns of the Great War. Yet the performance of the Ottomans, the victors, has often received less attention than that of the Allied army they defeated. Edward Erickson, in this perceptive study, now released in paperback, concentrates on the Ottoman side of the campaign. He looks in detail at the Ottoman Army – its structure, tactics and deployment – and at the conduct of the commanders who served it so well. His pioneering work complements the extensive literature on other aspects of the Gallipoli battle, in particular those accounts that have focused on the experience of the British, Australians and New Zealanders. This highly original reassessment of the campaign will be essential reading for students of the Great War, especially the conflict in the Middle East.

Erickson's analysis of the battle itself is insightful and detailed and his writing style is extremely engaging and easily maintains the reader's interest.

This detailed appraisal of the Gallipoli campaign from the victorious Ottoman perspective is essential reading.

While the majority of the studies on the Gallipoli campaign of 1915/1916 examine the question of why the Allies were defeated at Gallipoli, Edward Erickson's important new book asks instead why the Ottomans emerged victorious.

The Journal of Military History

Many books have been written about the abortive Gallipoli Campaign. In this book the battles are analysed from the Ottoman perspective. This is Edward Erickson's fourth book on the Ottoman Army in the Balkan Wars and as an ally of Germany in WW1. In it he details pre-war Turkish planning, the strong artilelry defences on the Gallipoli Peninsula and in the waters surrounding it, as well as each of the land battles fought there from the landings of April 1915 to the final British evacuations in January 1916. Excellent maps and detailed orders of battle enhance the analysis.
Erickson also reminds us of the flawed British plan of attack and its faulty execution. The British, having successfully bombarded Turkish defences at the at the entrance to the Dardanelles in August 1916 and overestimating Ottoman setbacks at Basra, at Sakrikamis and in the Sinai in 1914 and 1915, mistakely perceived the Turks as weak opponents. This, coupled with contemporary social Darwinism, led to overconfidence in judging the capabilities of the 'backward' Turks. The failure of the oddly mismatched combined Franco-British fleet to force the strait and lack of initiative by commanders on the ground after the April 1915 landings combined with a fierce and well prepared Turkish defence doomed the effort to open a new supply route to Russia and knock the Ottoman Empire out of the war. Indeed, many modern and contemporary military analysts assert that the campaign was ill-fated from the start. In this crisply drafted monograph. Ed Erickson helps us understand why.

The Western Front Association Stand To! No. 91

This book is a must for every reader about Gallipoli who at the same time should have alongside one of the key recent western histories. This is in order to see how the Ottoman Fifth Army fought a successful and prolonged campaign against an enemy with far greater resources an command of sea and air.

Superb new book on the Ottoman perspective of Gallipoli. Erickson has provided extensive insights into the preparations for and execution of the defense of Gallipoli. He has drawn on multiple Turkish sources, including detailed maps. Erickson traces the effects of the Balkans Wars on the defensive preparations. The training of the Ottoman defenders is described in some detail. The Ottoman attacks, counter-attacks and defensive operations are considered at tactical and operational levels. Erickson has looked at command and control, as well as logistics operations. The insights place the campaign into a clearer perspective, dousing many of the traditional views of the Ottoman Army that have been perpetrated in the English literature.