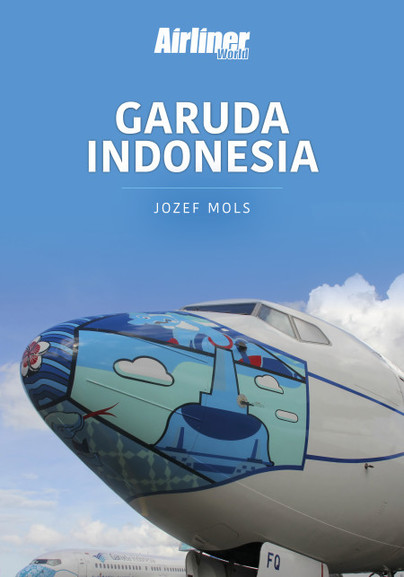 Add to Basket
Add to Wishlist
You'll be £12.79 closer to your next £10.00 credit when you purchase Garuda Indonesia. What's this?
+£4.50 UK Delivery or free UK delivery if order is over £40
(click here for international delivery rates)

On 26 January 1949, Garuda Indonesia was officially established as Indonesia’s government-owned flag carrier. To begin with, the airline focused on domestic and regional travel. However, in 1962, the Dutch-occupied island of Dutch New Guinea was added to the Indonesian territory and Garuda faced the huge challenge of starting up flights to the very remote and isolated settlements of Irian Jaya. Fortunately, the airline had the assistance of another Indonesian government-owned airline, Merpati, which would later become a feeder and subsidiary of Garuda.

In the mid-1980s, a massive reorganization led to Garuda offering international flights, which required the modernization of the entire fleet. The late ’90s saw a new management having to cope with the disastrous effects of the Asian financial crisis closely followed by the deregulation of the aviation industry in 2000, which greatly increased competition in the domestic market. Over subsequent years, Garuda has faced many more challenges, from the effects of the 9/11 terrorist attacks and the Bali bombings to the 2003 SARS epidemic and the COVID-19 pandemic. However, despite these setbacks, it has successfully transitioned from a small domestic carrier to a player on the international stage. This fully illustrated volume looks at Garuda’s turbulent history from its involvement in Indonesia’s post-war struggle for independence to operations during the 2020 COVID-19 pandemic.

Jozef Mols was born in Antwerp on May 28, 1951. He studied applied economics with emphasis on marketing, consular sciences and economics of Third World Countries. At the end of his studies, he organized an expedition with 26 co-students (economics of the Third World Countries) to Turkey, Iran and Afghanistan. Subsequently, he lived in the Persian Gulf as an analyst and visited Iran, Afghanistan, Iraq, Saudi-Arabia, Kuwait, Qatar, and Oman on assignment. Afterwards, he continued the same work but based in Paris and, subsequently, Rome. In 1987, he returned to Belgium to start teaching at several institutes for higher education. Upon this return in Belgium in 1997, he continued to teach. In 2002, he retired from education and started a full-time career as a writer and speaker. Jozef has had been writing magazine articles for over 40 years and has been published in numerous travel, lifestyle and aviation magazines, including Pilot Club, Airliner World, Airports of the World, Aviation News, Piloot en Vliegtuig and Ambassadeurs.