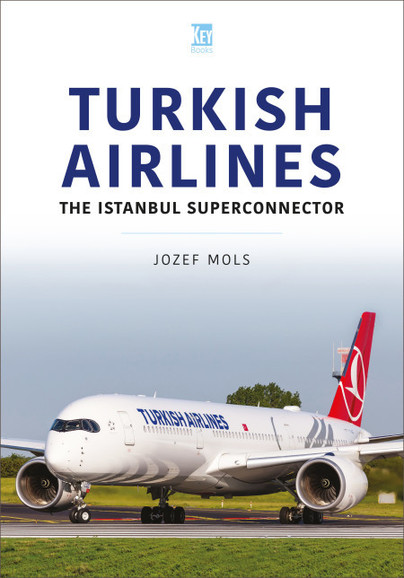 Preorder
Add to Wishlist
You'll be £12.79 closer to your next £10.00 credit when you purchase Turkish Airlines: The Istanbul Superconnector. What's this?
+£4.50 UK Delivery or free UK delivery if order is over £40
(click here for international delivery rates)

"Turkish Airlines’ origins go back to 1933, when the Turkish government established the State Airlines Administration with a fleet of just five aircraft and a staff of 24 people. Initially, the route network only included domestic destinations, but it was soon followed by flights to Nicosia (which has a large Turkish population), Beirut (the financial heart of the Middle East) and Cairo (the political epicentre of the region). In 1956, the airline was restructured and transformed into the current Turkish Airlines. From that moment, the airline started a rapid international expansion. At first, many destinations in Germany were served because of the large number of Turkish workers in that country, but other major European cities were soon added to the network.

Of course, the airline has faced many challenges, such as the deregulation of air transport in Turkey, the devaluations of the Turkish currency and domestic political unrest. Geopolitical factors such as the tensions with Russia and the war in Syria may also have caused some issues for the airline’s management. With 150 images, this book charts Turkish Airlines’ history, showing how it has become one of the largest airlines in the world."

Jozef Mols was born in Antwerp on May 28, 1951. He studied applied economics with emphasis on marketing, consular sciences and economics of Third World Countries. At the end of his studies, he organized an expedition with 26 co-students (economics of the Third World Countries) to Turkey, Iran and Afghanistan. Subsequently, he lived in the Persian Gulf as an analyst and visited Iran, Afghanistan, Iraq, Saudi-Arabia, Kuwait, Qatar, and Oman on assignment. Afterwards, he continued the same work but based in Paris and, subsequently, Rome. In 1987, he returned to Belgium to start teaching at several institutes for higher education. Upon this return in Belgium in 1997, he continued to teach. In 2002, he retired from education and started a full-time career as a writer and speaker. Jozef has had been writing magazine articles for over 40 years and has been published in numerous travel, lifestyle and aviation magazines, including Pilot Club, Airliner World, Airports of the World, Aviation News, Piloot en Vliegtuig and Ambassadeurs.