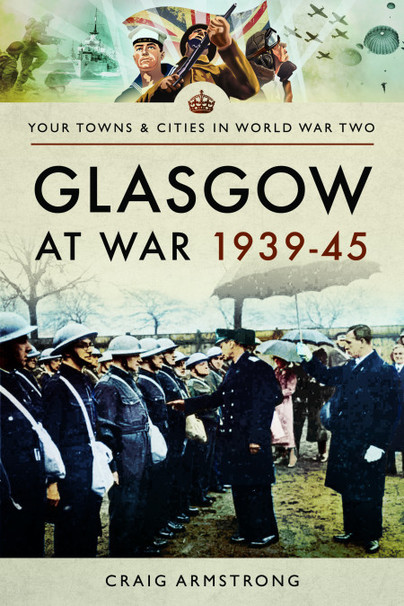 Scotland was of grave strategic importance during the war because of its geographical position and Glasgow was the location of a significant number of important military and civil organisations as well as housing industry which was vital to the national war effort.

Glasgow’s importance attracted enemy attention on many occasions with the city and its hinterland being heavily raided by the Luftwaffe. These raids included the infamous raid on Clydebank on 13th and 14th March which killed over 500 dead and only seven houses undamaged in the town. Under relentless bombing the Glaswegians maintained their spirit and remained committed to the war effort.

Although Glasgow’s shipyards, munitions factories and other industries were all vital to the war effort so too was the location of the city itself. The Clyde was the end point for many Atlantic convoys bringing precious food, material and men to the war-struck British Isles and the city was thus a vital link in the nation’s war effort.

No member of the population of Glasgow escaped the war, whether it was the huge numbers of men and women from the area who came forward for service in the military or in roles such as the Home Guard, ARP services, nursing, working in vital war industries, struggling to maintain a household under strict rationing and the stresses of wartime life, or children evacuated from the city to the rural areas of Scotland to escape the expected bombing campaign.

Glasgow was also home to a sizable Italian community which was badly affected by internment and the subsequent tight restrictions on movement and civil rights. The Italian community was also subjected to violent attacks when rioting mobs attacked Italian owned business throughout the city.&#8232;&#8232;Edinburgh at War 1939-1945 poignantly commemorates the efforts and achievements of Edinburgh: workers, fighters, families divided, all surviving astounding tests.


My favourite section was around the Blitz – particularly how Glasgow rallied to face the onslaught of German bombs with little training and a lack of proper infrastructure. The mention of some particularly heroic acts and sacrifices by ordinary working people really highlighted a ‘Glasgow at war’ for me.

It is difficult to imagine a town (or city) such as Glasgow suffering Luftwaffe raids on Clydebank that left 500 people dead and only seven houses undamaged. This kind of statistic is off the scale, but Craig Armstrong's second book in this month's selection leaves no stone unturned as he describes how the people of Glasgow suffered and reacted to the loss of life and property.

'A look at the latest Scottish books by Bethany Ferguson'

The very popular Your Towns & Cities in World War Two, is expanded with this important war target, Glasgow. The Germans were able to reach any part of the British Isles with bombers but although many areas were bombed, special attention was devoted to prime targets like Glasgow – Very Highly Recommended. When news of the war broke out in 1914, nothing could prepare the citizens of Glasgow for the changes that would envelop their city over the next four years. The story of Glasgow in the Great War is both an interesting and intriguing one. This book covers this historic city’s involvement from the commencement of the Great War in July 1914, to the Armistice in November 1918, describing in great detail what happened to the city and its people, including their everyday lives, entertainment, spies and the internment of aliens living within the city. Glasgow played a key role in the deployment of…