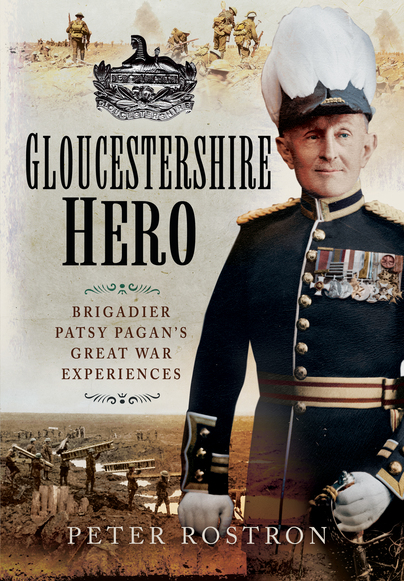 Add to Basket
Add to Wishlist
You'll be £13.99 closer to your next £10.00 credit when you purchase Gloucestershire Hero. What's this?
+£4.50 UK Delivery or free UK delivery if order is over £35
(click here for international delivery rates)

Small in physical stature Colonel, later Brigadier, Patsy Pagan was seen as a giant by the men of the Gloucestershire Regiment, whom he commanded for over three gruelling years of The Great War.

He and his Battalion endured some of the hardest fighting and grimmest conditions on the Western Front; The battles of Loos 1915, Somme 1916 and Passchendaele 1917. Wounded three times, Pagan discharged himself from hospital to rejoin his men rather than be evacuated to Blighty.

He reluctantly left his beloved Glosters when promoted to command a brigade for the closing months of the war. His brigade found itself as the last line of defence before the Channel against the Germans' 1918 offensive.
The author uncovers the contribution and character of this great fighting soldier through personal records, trench diaries and other official papers. This is a stirring and inspiring read.

'Patsy' Pagan was a fine example of a generation of regular soldiers throughout the turbulence of the Army who made a significant contribution to holding it together throughout the turbulence of the Great War. They had been bloodied in South Africa and knew the value of training, fitness, discipline and, above all, regimental comradeship which could maintain morale in the most testing of circumstances. Of all the major combatants engaged in the 1914-18 war, the British Army was the one that never broke and its officers, such as Pagan, played a central part in the final victory.

Soldiers of the Gloucestershire Museum

Prepare to be sucked straight into the maelstrom of the Western Front of 1915 by this vivid biography.

...Throughout the book the point is not so much the detail as the atmosphere that pervades the whole storyline. The Prologue, however, draws you straight into the human dimension of this war, taking place on Britain’s very doorstep: the hearty reunions tinged with apprehension, the women and children fading into the background of khaki-clad crowds, the optimistic anticipation of great deeds.

Peter Rostron tells the story through short extracts from the Battalion’s war diaries, personal letters and fills in the gaps with a narrative. He links events going on in the wider world to give context and chronology to the situation and this method widens the interest for the general reader.