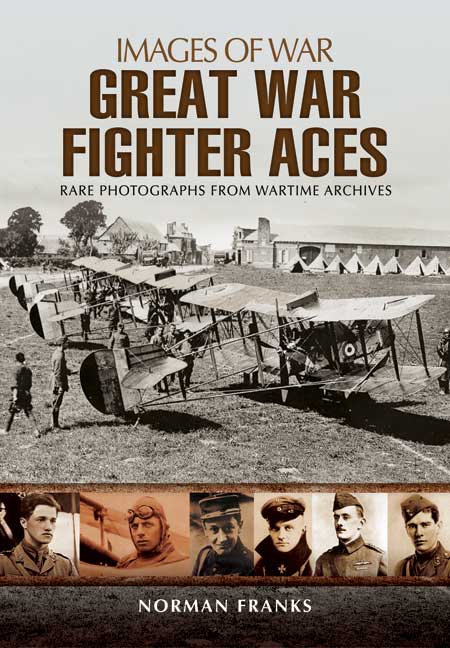 Here, Norman Franks tells the story, in words and images, of the emergence of some of the greatest fighter aces to see action during the first half of the First World War. He explores the manner in which the situation developed from late 1914 to the late summer of 1916, the point at which Oswald Boelcke helped form the German Jasta system that would prove so devastating to the RFC and RNAS.

Utilising images drawn from his large personal archive of photographs, Franks profiles some of the greatest and most notorious aces, as well as the aircraft in which they flew. The first years of the war saw some of the bravest acts of pilot gallantry and ingenuity play out. Franks celebrates the legacy of just a handful of these individuals, participants on both sides, including Boelcke's premier ace Manfred Von Richtofen, Lanoe Hawker, Georges Guynemer, Albert Ball, Lionel Rees, Wilhelm Frankl, and Stanley Dallas amongst many others.

The picture sections focus very heavily on the aces themselves, with a mix of formal portraits and less structures pictures taken around their aircraft. A smaller number of photos look at the aircraft themselves, including some of the ace's victories. Each picture is supported by a useful caption.

This book will give the beginner a very sound start while also holding the attention of the expert.

Filled with interesting details as expected from Franks.
It would give the beginner a very sound start, while holding the attention of the expert.

This is a book that can be enjoyed by a straightforward read or from any point the reader chooses. The pictures tell as good a story as the narrative and each complements the other. This is a welcome addition to the literature, hopefully to be followed by a second volume covering the remainder of the conflict.

The Past in Reviews

This book captures the essence of the early years of aerial combat in WWI and will be greatly appreciated by enthusiasts, scholars, and those developing an interest in aerial combat.

Norman Franks is one of the reliable historians we are lucky to have and he pops up here with a genuinely charming and engaging photo album of the Great War aces. ... This is a wonderful book. As ever, the accompanying text does the business in support of a genuinely beautiful collection of portraits and snaps of aces from across the conflict.