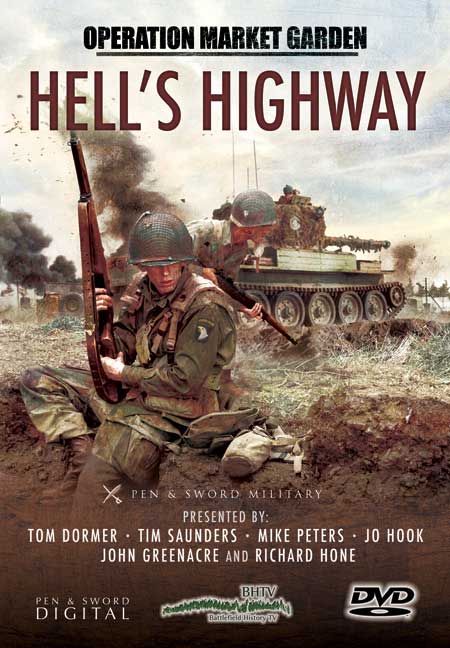 Add to Basket
Add to Wishlist
You'll be £12.99 closer to your next £10.00 credit when you purchase Hell's Highway: Market Garden Collection. What's this?
+£4.50 UK Delivery or free UK delivery if order is over £35
(click here for international delivery rates)

Montgomery's brainchild, Operation Market Garden, was designed to end the war by Christmas 1944 and clear away Hitler's V weapons from the North Sea Coast. Following the collapse of the German Army in Normandy and its flight back across northern France, it seemed that a bold move to seize the three major and numerous other waterways across Holland would place the Second British Army beyond the Rhine. This would deliver Germany's powerhouse the Ruhr, put the Allies on the North German Plain and the road to Berlin. The Allies had, however, outran their supplies and the Germans were staging an amazing strategic recovery. The BHTV team, made up of leading historians and battlefield guides, probe the controversial background to Operation Market Garden.

Early afternoon on 17 September 1944 the 101st US Airborne Division (Screaming Eagles), who parachuted onto Drop Zones dictated by the air planners wish to avoid 'unnecessary casualties from flak' around Eindhoven, had been denied a coup de main against the first significant canal bridge at Son. With plenty of warning of the approach of the US paratroopers, the Germans blew the bridge arguably dealing Market Garden a potentially mortal blow.

The delay in reaching and bridging the canal at Son was significant but German resistance was hardening as troops were rushed to attack the airborne carpet and single route the British intended to use across Holland. With the bridging operation complete the Grenadier Guards Group covered the next 30 miles to Nijmegen in little over three hour. Market Garden looked as if it were back on schedule despite the setbacks and Arnhem was only ten miles further on.

It was one thing to reach Nijmegen in forty hours but for the American Paratroopers holding the route open proved to be a different matter! The road north across Holland quickly earned the well deserved nick name 'Hell's Highway'. The paratroopers had to constantly fend of the growing number of enemy troops who were mounting increasingly strong attacks from east and west. Lacking numbers on the ground and transport it was an unequal battle to keep the road open.

The Germans only had to get within firing range of the road elevated across the surrounding flat terrain to effectively close the vital highway and starve the troops fighting to reach Arnhem of all kinds of combat supplies.

The team will examine successes and failures on Hell's Highway to find out whether the reasons for failure can be found on here or was it soldiers of two nations fighting alongside each other to execute a fatally flawed plan?


BHTV have produced an interesting DVD here that probably leaves you with a few unanswered questions about one of the second world war’s failures. Get’s you thinking though…!!

The presenters provide a graphic account of the ground troops battle towards Arnhem and provide fresh insights into what an operation that did much to advance the Allies dash for victory.

The presentation is good and the original maps and details of orbit are something I have not seen before, in fact some have never been seen outside of military archives!
..this is a very good and illuminating presentation, very much what we have come to expect from Pen and Sword Military and one I would heartily recommend.