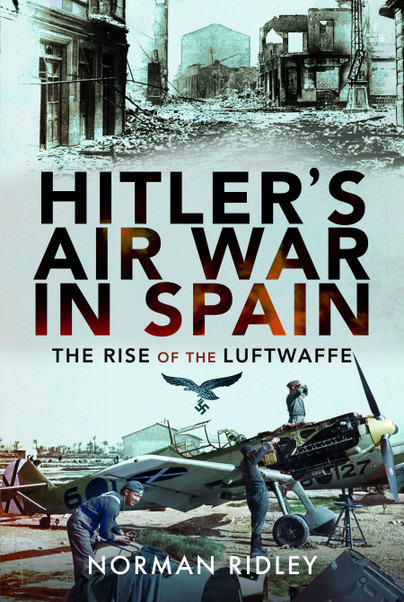 The Rise of the Luftwaffe

Add to Basket
Add to Wishlist
You'll be £20.00 closer to your next £10.00 credit when you purchase Hitler's Air War in Spain. What's this?
+£4.50 UK Delivery or free UK delivery if order is over £35
(click here for international delivery rates)

Almost since the advent of warfare, civilians have suffered ‘collateral damage’, but the concept of Total War – a war without limits – only surfaced in the early part of the twentieth century. The idea of huge numbers of aircraft raining death upon defenceless cities was seen by many as not only barbaric but, in practical terms, quite unrealistic given the logistical challenges that would have to be overcome in order to put them into practice.

Any complacency over the threat, however, was rudely shattered on 26 February 1935, when Adolf Hitler officially signed a decree authorizing the formation of the Luftwaffe. The third branch of Germany’s armed forces erupted on to the European military landscape. Its blustering claims of irrepressible air power sent waves of panic rippling through ministries of war throughout the world.

Framing a realistic response to Hitler’s propaganda offensive proved to be problematic given the lack of detailed knowledge of not only the numbers, but also the true performance capabilities of his new generation of aircraft and the ways in which they had expanded the boundaries of war. It was, therefore, of huge interest to all modern military establishments when these machines were deployed during the Spanish Civil War which broke out in July 1936. Notwithstanding the limited scope of this conflict, it offered, for the participating nations, a testing ground for new machines and, for the interested observers, a window into the future of aerial warfare.

When the Spanish Civil War was less than a year old it had already seen air power employed in most of the ways that it would be used in the Second World War. This not only included airlifting troops, reconnaissance, interdiction, close support and strategic bombing, but also the deliberate targeting of civilians as a means of achieving military objectives.

This book looks at all the significant aerial engagements of the war and examines them against the background of the wider global context. In this way, the Spanish Civil War’s part in the evolution of air power is confirmed, as is the way in which its lessons were learned, or ignored, in the context of the much greater conflagration that was to come.

A truly interesting read. The history behind the involvement of Germany, Italy, France, and Russia in the Spanish civil war is fascinating. The behind the scenes politics is a great story. The story is informative and a great history read. A must read for the historians!

I am delighted to say that I learned at least as much about the Soviet support for the Republic as I did about the Germans and their formidable investment in Franco's success. The book is far from comprehensive but instead offers a solid understanding of the fundamental German,, Italian, and Soviet commitment to providing air support to their respective client states in this struggle. Just as important, it provides significant support for the widely acknowledged role of the struggle as a testbed for aeronautical technology and the strategic and tactical implications inherent in the emerging technology of aerial warfare. Significantly, a read of this text suggests strongly that little was actually learned about broad strategic and tactical applications and their limitations because so many of the institutions involved were already committed to misguided notions like "the bomber will always get through." It is not that careful study of events like the bombing of Guernica might not have revealed flaws in understanding the long term effects of indiscriminate area attacks on local populations, but rather that the competing narratives/mythologies of the war winning consequences of these kind of attacks seems to have already thoroughly permeated the thinking of leadership at all levels, and they remained as determinedly committed to them at the conclusion of their engagement in Spain as they were at the beginning. Another example is the vital role of close air support to both sides, well understood at the time but obviously dismissed by the respective air forces involved (not to speak of their future opponents in the United Kingdom and United States) as they prepared for global war. One can see the origins of weapons and strategies that paid off handsomely as well as those that were shamefully neglected despite their transparent utility on the battlefield.
There is a great deal of food for thought here.